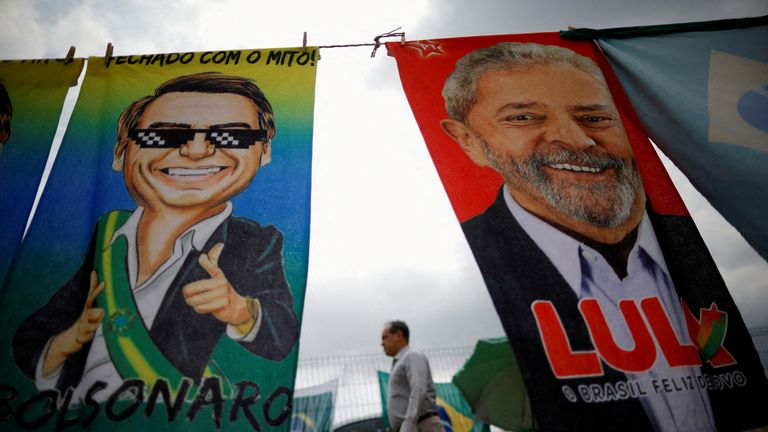 The majority of people we had spoken to in the days and hours before the Brazilian presidential election results came in expressed a hope there would be a first round victor.

Luiz Inacio Lula da Silva and Jair Bolsonaro supporters wanted the same thing – an outright victory because they fear what is going to happen in the weeks before 30 October, and indeed even after the second round vote is completed.

Both sides have uncompromising supporters.

Brazil‘s political turmoil feels very much like the divided and febrile atmosphere that overshadows the United States political discourse.

There appears to be no compromise here. There is tension, there is a plethora of fake news social media posts, and there is an electorate in the middle that seems both engaged and exhausted in equal measure.

I travelled to one of the country’s oldest favelas – some say Morro da Providencia is in fact the oldest.

We wanted to see what the people who inhabit this slum think about an election that will certainly affect them, but like so much in this society, often passes them by.

They are desperately poor and marginalised, there is little social care to speak of, and little investment of any kind.

The favelas dominate the hillsides that overlook some of the most upscale parts of Rio de Janeiro – one of the world’s most glamorous cities.

We reached the top of Morro da Providencia, passing a disused and abandoned cable car built for the Olympics and the World Cup.

In many ways it is a monument to government failure to adequately care or build upon infrastructure in these neighbourhoods.

But with the election on, and the votes here desperately needed, they do now.

Bullet holes from gang fights pepper the building beneath the cable car station, where Juraci Gomes runs a cafe, helped by her husband Claudio and her grandson Gilbert.

Their business thrived when the cable car worked, now they struggle.

“Things are not going well in our country, things are very hard,” Juraci told me while flitting around the cafe’s kitchen preparing lunch for occasional customers.

“We don’t know if it will get better because our president, we don’t believe him that he will make it better, because after four years, it’s only just started to get better at the end of his presidency [to try win votes].”

Her grandson Gilbert was cutting vegetables alongside her, listening to our conversation. I asked him what he thought about what was happening. He voiced the concern that so many have of a spike in political violence.

“We are afraid of being on the streets, we are afraid to voice our political opinion, and other things. We see a lot of people not speaking up because they are afraid, because we have a government that incites violence.”

There are millions like them, unsure what’s going to happen next.

You might think some people here would naturally lean towards a potential left-wing government, but the divisiveness of this election and society in general means that isn’t necessarily the case.

We met Jacqueline, a health care worker on her way to meet families – she was reticent to talk politics.

I got the sense she felt it was just too tense to speak openly about her beliefs here on the street.

“People are more interested in their health and putting food on the table in this neighbourhood than talking politics,” she said, asking us to only refer to her by her first name.

Local politicians have until the end of the month to convince the electorate differently.

Cosme Fellipsen is in Lula da Silva’s Workers’ Party and ran in this election as a federal deputy for his local constituency.

He’s convinced that Lula can win, and says he will be knocking on doors here because his party’s policies have always favoured the poor and working classes over the wealthy.

Lula is ahead but President Bolsonaro isn’t far behind, and they both know their constituencies are with them.

But it’s the undecided and marginalised in communities like this one who hold the balance of power.