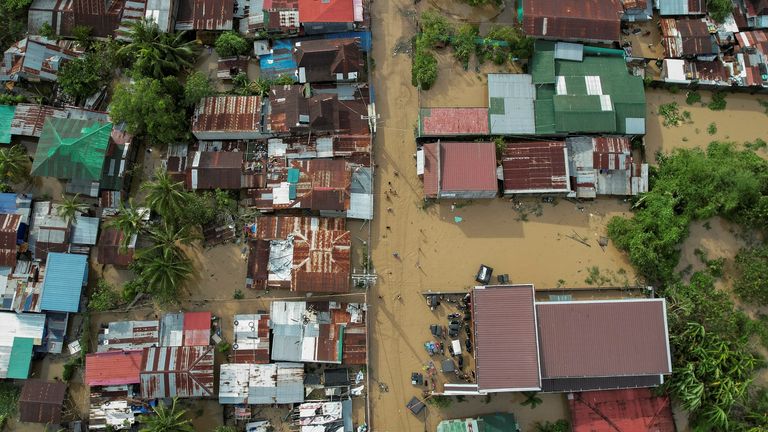 Five Filipino rescue workers were killed by a typhoon in the Philippines. The typhoon has caused flooding and power outages, leading to thousands of people having to be evacuated.

Typhoon Noru, with sustained winds of up to 115 miles an hour, struck Luzon’s main island at the weekend. More than half the country’s 110million inhabitants live there. Authorities shut down schools, government offices, and the stock exchange through Monday.

According to Governor Daniel Fernando, the rescuers were killed in Bulacan province. Residents were seen wading through waist deep water while others were left stranded on rooftops.

Over 74,000 people were evacuated by the typhoon’s path. President Ferdinand Marcos ordered officials to supply emergency power supply to two provinces north, Aurora and Nueva Ecija. They were left without electricity.

He stated that “the point at which it is possible to stand down” was when most evacuees have returned home, during a news conference attended by disaster management officials.

He also ordered that supplies be flown and that clean-up equipment be provided to the most affected communities.

The coastguard stated that fishing boats, inter-island and cargo ferry vessels were not allowed to dock at ports. This was done as a precaution and stranded cargo trucks and more then 2,500 passengers.

Over 30 flights from Manila to domestic destinations were cancelled.

Noru was a category 3 storm that made landfall on Sunday, but it was weakened as it crossed land.

According to the state weather agency, it was heading out over the South China Sea towards Vietnam.

Each year, the Philippines is battered by approximately 20 storms or typhoons.

The archipelago is also located in the “Pacific Ring of Fire”, an area along the Pacific Ocean rim, where volcanic eruptions and earthquakes are common. This makes the Southeast Asian nation one of most vulnerable to disasters.