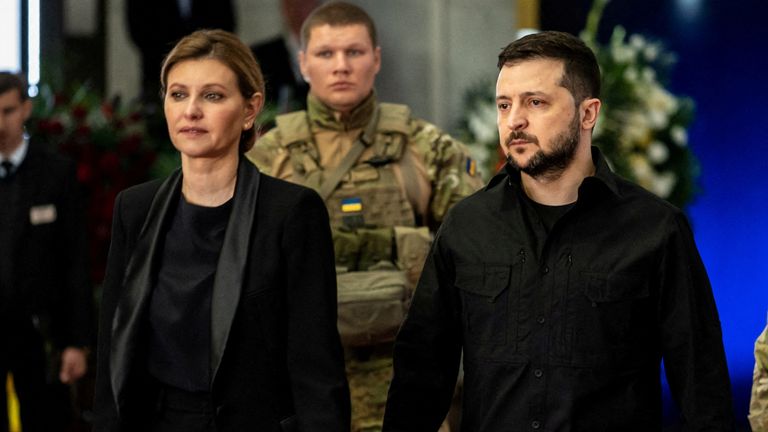 The Ukrainian first lady has told Pink Floyd co-creator Roger Waters to back off from criticising her husband over the Russian invasion – and told him bluntly to “ask Putin for peace” instead.

Waters wrote an open letter to Olena Zelenska in which he blamed “extreme nationalists” in Ukraine for having “set your country on the path to this disastrous war”.

Angered by his comments, a city councillor in the Polish city of Krakow – where Waters and his band were due to play live next spring – scheduled a vote on declaring the musician a “persona non grata”, and now the concerts have been cancelled.

Lukasz Wantuch said: “Allowing Roger Waters, an open supporter of Putin, to play in Krakow… would be shameful for our city.

“Let him sing in Moscow.”

Mrs Zelenska told Waters in a Twitter response to his open letter, which was posted on Facebook, that it was “Russia that invaded Ukraine, destroys cities and kills civilians”.

She went on: “Ukrainians defend their land and their children’s future. If we give up – we will not exist tomorrow.

“If Russia gives up – war will be over.”

An official with the Tauron Arena in Krakow, where Waters was scheduled to perform two concerts in April, said they would no longer take place.

Poland has been a staunch ally of its neighbour and since the invasion in February has taken in more than a million refugees fleeing across the border.

The website for Waters’ This Is Not a Drill concert tour no longer lists the two Krakow concerts previously scheduled for next April.

Waters, 79, hit back on Sunday, saying his team did not cancel the gigs.

Under a monochrome photograph of him, with the words “human rights” in neon above, he wrote in capitals, referencing the lyrics of the classic Pink Floyd song, Another Brick in the Wall:

In his original letter to Mrs Zelenska, Waters had said his “heart bleeds for you and all the Ukrainian and Russian families, devastated by the terrible war in Ukraine”.

But he then went on to criticise Volodymyr Zelenskyy, the president, for not fulfilling an election promise to “end the civil war in the East and bring peace to the Donbas and partial autonomy to Donetsk and Luhansk”.

He told her: “Your old man agreed to totalitarian, anti-democratic dismissals of the will of the Ukrainian people, and the forces of extreme nationalism that had lurked, malevolent, in the shadows, have, since then, ruled the Ukraine.”

He also criticised the West for supplying Ukraine with weapons, blaming Washington, in particular.

“Throwing fuel, in the form of armaments, into a fire fight, has never worked to shorten a war in the past, and it won’t work now, particularly because, in this case, most of the fuel is (a) being thrown into the fire from Washington DC, which is at a relatively safe distance from the conflagration, and (b) because the ‘fuel throwers’ have already declared an interest in the war going on for as long as possible.

“I fear that we, and by we, I mean people like you and me who actually want peace in Ukraine, who don’t want the outcome to be that you have to fight to the last Ukrainian life, and possibly even, if the worst comes to the worst, to the last human life.”

Waters separated from Pink Floyd in the mid-1980s.