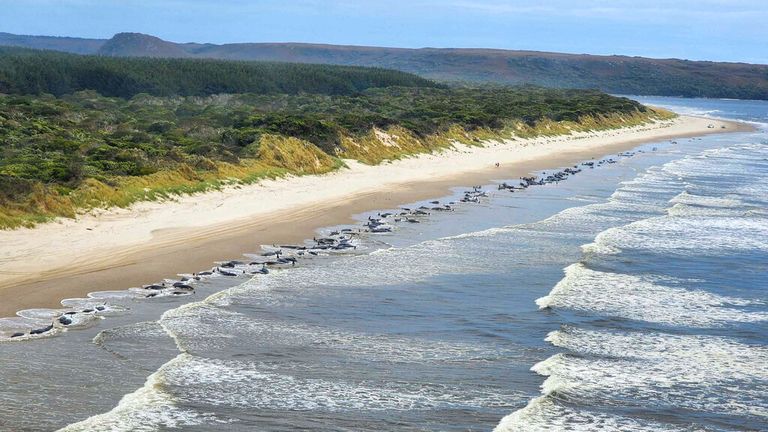 Most of the 230 whales found stranded on Tasmania’s west coast have died, Australian authorities say.

The pod of pilot whales beached on Wednesday at the entrance to Macquarie Harbour, known as Hells Gates.

After rough surf overnight just 35 are still alive, with rescuers focusing on trying to push them back out to sea.

Kris Carlyon from the Department of Natural Resources and Environment Tasmania told the Australian Broadcasting Corp that “mechanical aid” from an aquaculture company would help to lift the animals off the dry sand.

“What we will be attempting to do is move them via vessel into deep, clear water, so they have the best chance of survival,” Dr Carlyon said.

“Our priority is animal welfare in this situation along with protecting our staff and volunteers who have specialised training in whale rescue and can undertake this task safety.”

Despite many keen volunteers, authorities have said the rescue work should be left to the experts.

Most of the whales are stranded on Ocean Beach while some are on a nearby sand flat within the harbour.

Curious onlookers have been told to stay away from the whales that are already dead, as the species is protected and it is an offence to interfere with a carcass.

This whale stranding happened two years to the day after the largest stranding in Australian history.

About 470 long-finned pilot whales beached on sandbars in the same harbour on 21 September 2020 and, despite rescue efforts, all but 111 of them died.

Pilot whales are known for stranding in large numbers and the reasons are not always clear.

On Monday, 14 sperm whales were found washed ashore on King Island, in the Bass Strait between Melbourne and northern Tasmania.

Griffith University marine scientist Olaf Meynecke said this could be a result of warmer temperatures changing the ocean currents and moving the whales’ food sources.

He said: “They will be going to different areas and searching for different food sources.

“When they do this, they are not in the best physical condition because they might be starving so this can lead them to take more risks and maybe go closer to shore.”