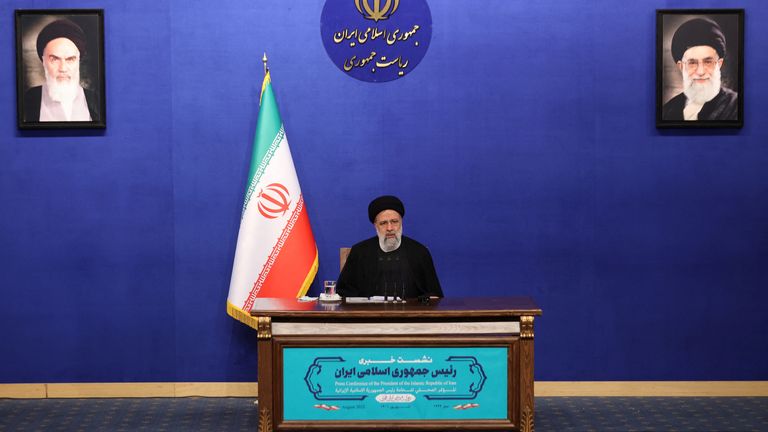 Iran has seen protests after a young woman was killed by the morality police.

After being taken into custody by Iranian officers for violating Iran’s strict hijab regulations, Mahsa Amini was placed in a coma.

According to police, the 22-year old was admitted to hospital after suffering a heart attack.

An uncle of Ms. Amini was quoted by pro-reform news sites as saying that she had no heart disease history.

Iran’s President Ebrahim Rashi has requested that the incident be investigated with “urgency” and “special attention”, according to state media.

According to the Center for Human Rights in Iran, Ms. Amini was visiting her family in Tehran when she was taken into custody Tuesday for “unacceptable hijab”.

The organisation stated that her family was informed that she was being taken to’reeducation’ and would be released in the evening.

According to social media reports, officers found fault with her hijab or headscarf.

Since 1979, Iran’s women have been required to wear a headscarf. Members of the morality police enforce this strict dress code.

Iranian rights activists have been urging women to remove their veil publically over the past months in defiance. Women could be arrested for attempting to defy the Islamic dress code by making this gesture.

After her death, photos on social media showed protesters shouting “death (Khamenei),” while drivers honked their cars in a Tehran square near the hospital where she was pronounced dead.

Police said that Ms. Amini was not violent towards officers or had any physical contact with them while she was being held in custody on Friday.

Police also shared CCTV footage that showed Ms. Amini in a police station with other detainees.

She stands up from a seat, and then she speaks to another woman. After that, she holds her head with both of her hands, and then falls against a chair.

Another clip shows her being taken on a stretcher.


“Our children are dying”

The death of Ms. Amini has been condemned by Iranian athletes, celebrities, and other public figures.

Mohammad Khatami, a former president pro-reform, said that the behavior of the morality officers was a “disaster”, while Robert Malley, the US special envoy to Iran, called the incident “appalling”.

He said, “Those responsible for her demise should be held accountable.”

Ali Karimi, a popular ex-football player, tweeted that children of high-ranking officials were leaving the country while “our children are dying”.

“We need to take action, not apologize”

This is not the first time that the country’s morality policy has been criticized.

It has been condemned for its treatment of young women and officers forcing them into police cars.

Hardliners, however, advocate harsh punishments and even lashes because they believe that allowing women’s hair to be exposed leads to moral decay and family disintegration.

After dozens of women took off their headscarves during a wave protests, authorities have taken tougher steps.