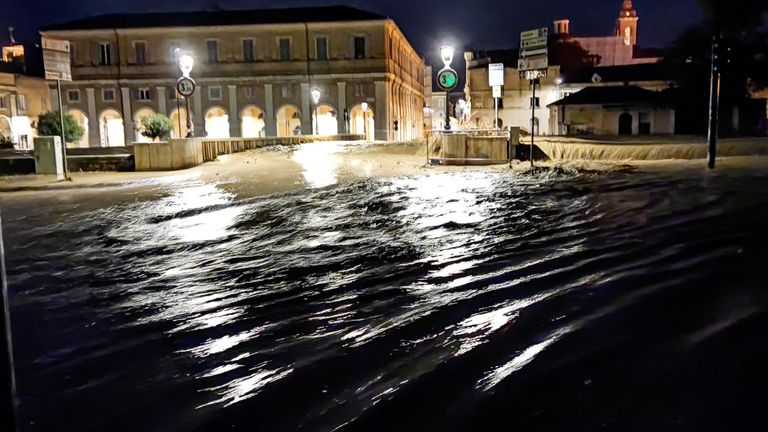 After 40 cm of rain fell in the Marche region, four people including a mother-daughter duo are now missing.

Local authorities claimed they were not prepared for the sudden “water blast” that would drop in just two to three hours. It was compared to an earthquake and a “tsunami”.

Many streets in several towns of the region’s capital, Ancona on the Adriatic coast and Pesaro–Urbino provinces were submerged by the water.

Residents scrambled up trees and onto rooftops as the cars were washed away.

A man and his adult child were among the dead, found unresponsive in their garage flooded by water after they tried to escape from their car.

One resident was killed trying to escape on his motorcycle, while another man was discovered dead in his car.

A boy was pulled from his mother’s arms by the powerful rains. He was then rescued. A total of 50 people were treated at hospital for injuries.

Rescue efforts involve around 300 firefighters. Crews are seen using dinghies to transport people to safety while others clear debris.

Ludovico Caverni (mayor of Serra Sant’Abbondio) said that the downpours felt “like an earthquake”, according to RAI state radio.

Riccardo Pasqualini (mayor of Barbara) said that 1,300 people were without water after overnight flooding.

He said that it wasn’t a bomb or a tsunami and told Italian state radio.

Stefano Aguzzi is the head of civil protection in Marche’s region government. He said that the rain was stronger than expected.

He said that although we were given a normal rain alert, nobody expected anything more.

Fabrizio Curcio is the head of the national civil protective agency and will be visiting Ancona to assess the damages.

According to Italian police, some villages were isolated and roads closed due to extreme weather that left a trail.

Paola Pino D’Astore, an expert from the Italian Society of Environmental Geology said that the floods were caused by climate change.

She warned that “it is an irreversible phenomena, a taste for what our future will look like.”

Mario Draghi, the Italian Prime Minister, stated that 10 people had been killed and four others were missing at a press conference in Rome. He thanked emergency workers for their help.

Meanwhile, political party leaders who are campaigning for Italy’s general election on 25 September also showed solidarity with the rescue efforts.

Enrico Letta (leader of the centre-left Democratic Party) said that it would suspend Marche campaigning as a “sign to mourning” to allow local activists to assist flood-hit communities.

“Thinking (of), and crying for the victims.”

He expressed hope that rescue workers would succeed in their tireless work.