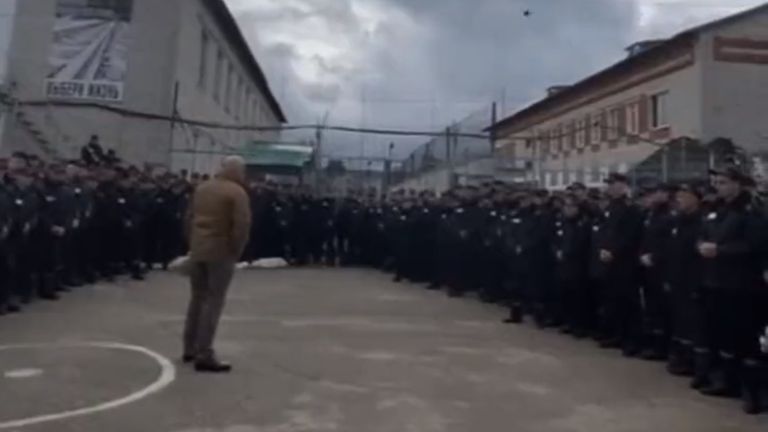 A leaked video appears to show a close ally of President Vladimir Putin offering pardons to Russian prisoners if they fight in Ukraine – but warning they will be shot dead if they desert when they get there.

In the footage, a man who is believed to be Yevgeny Prigozhin, the reported head of the private military company Wagner Group, is seen speaking to a large group in the outdoor area of a prison in Yoshkar-Ola.

He describes himself as a representative of the Wagner Group.

He tells the prisoners that they will be freed if they serve in Ukraine with Wagner.

“After six months, you go home, having received a pardon,” he says but they are warned that any deserters will be executed by a firing squad.

Prigozhin’s company, Concord, has not denied that it was him in the video. It said “we can confirm that the man in the video bears a striking resemblance” to him and that “that the person in the video has a very well-delivered speech, just like Yevgeny Viktorovich (Prigozhin)”.

The Wagner Group is a Russian private military company. It’s reportedly owned and funded by Prigozhin, something he routinely denies.

Its operations are “deeply intertwined” with the Russian military and intelligence community, according to the Center for Strategic and International Studies (CSIS).

There has been speculation that as the conflict continued and Russia suffered losses, the group was turning to the prison community to bolster its forces.

In the video, the man believed to be Prigozhin stresses the intensity of the conflict: “This war is hard. It’s not like any of the Chechen ones.”

Prisoners are told of strict conditions – drugs and alcohol are banned, as is sexual contact with “local women, flora, fauna, men – anyone”.

Russia desperately needs more troops in Ukraine having lost between 60,000 and 80,000 soldiers in deaths or injuries.

Vladimir Putin could solve that problem overnight by ordering a full mobilisation, but that would make it clear Russia was fighting a war, not a special military operation, and could be politically disastrous for him if it continued to go badly.

His government is now scraping the barrel it seems sending associates into jails to try and drum up new recruits.

Yevgheny Prigozhin has always denied involvement in the shady Wagner mercenary group. He is nicknamed Putin’s chef because he started out as caterer to the Kremlin.

Yet here he is openly representing the group it seems in a desperate recruitment drive.

As one of Putin’s closest cronies he knows the importance of Russia finding new troops to send to Ukraine.

But he is surprisingly frank about the situation there, saying the war is even worse than the extremely tough conflict which Russia fought in Chechnya.

He makes no attempt to sugar the pill but is offering freedom to those who sign up as well as death for those who think twice when they get there.

Only the most desperate of felons would be likely to take up the offer, but those facing long spells in Russia’s notoriously grim penal institutions may well be tempted.

Men between the ages of 22 and 50 are eligible to apply. It appears this can be irrespective of their sentence as the man thought to be Prigozhin explains: “We are very careful about those who were jailed for sexual abuse. But we understand that mistakes happen.”

It is not just Russian prisoners who could be fighting on the frontline. Ukrainian President Volodymyr Zelenskyy announced on 28 February that “Ukrainians with real combat experience – will be released from custody and will be able to compensate for their guilt in the hottest spots of war”.

Does the video feature Yevgeny Prigozhin?

A screenshot of the man in the video has been run through a facial recognition programme by open-source analysts. It returned a match to existing photographs of Yevgeny Prigozhin and the voice in the video also resembles existing audio of him speaking.

The man in the video also wears two medals. One appears to be the Hero of the Russian Federation, the highest honorary title in Russia. Prigozhin has previously been pictured wearing this medal.

The video has also been shared on pro-Wagner group Telegram channels, where it is described by supporters as showing Yevgeny Prigozhin recruiting for the war.

Where did it take place?

Sky News has geo-located the video to Yoshkar-Ola, Russia. A distinctive church and chimney in the video can be matched to satellite imagery.

The footage emerged and was reshared on Russian Telegram channels on 14 September. Sky News has been unable to independently verify the date or time the footage was filmed.