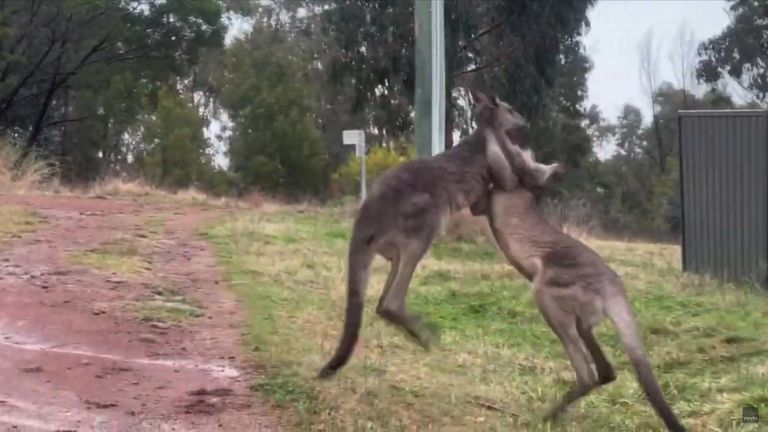 This week is believed to have seen Australia’s first fatal Kangaroo attack in nearly 90 years.

This happens after a man was fatally injured in an accident with a marsupial in Western Australia.

A 77-year old man was the latest victim. He was found with severe injuries at his Redmond home by a relative on Sunday.

Police believe he was keeping the animal as his pet.

The male kangaroo obstructed paramedics’ ability to treat the man when emergency services arrived on the scene.

The animal was then shot by police to reach it. He died on the spot.

Western grey kangaroos are up to 54kg in weight and can stand up to 1.3m tall.

They can also be very fearsome when they attack. They grab rival kangaroos or any other animals with their wet arms before landing fearsome kicks on their hop-strengthened feet.

Kangaroo shoved under fence to fight

The law restricts the keeping of native Australian animals, such as kangaroos. However, police claim they don’t know if the man was issued a license for the marsupial.

Tanya Irwin, from the Native Animal Rescue Service in Perth, said that “This looks like an adult male. They become quite aggressive and don’t do well when held in captivity.”

She said, “We don’t know the circumstances; if he was suffering or why he was being held in captivity, unfortunately… they’re not cute animals. They’re wild animals.”

Bill Bateman, Curtin University’s behavioural ecologist, stated: “My guess would be that if this Kangaroo was being kept as a pet, it wouldn’t perceive people as threatening. Animals in such situations often become aggressive.”

“Maybe it was reacting as if people were kangaroos and was defending itself or being aggressive. Or maybe it was getting ready for mate and then attacking people when it got onto the property.