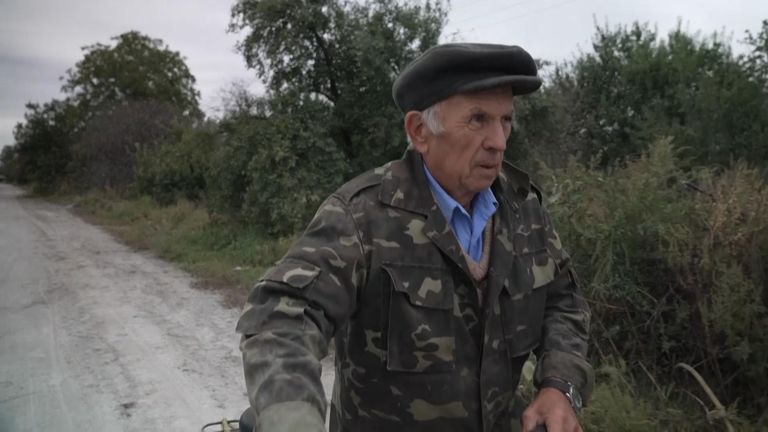 The Russian troops suddenly started shouting wildly and running around, before scrambling into their tanks and fleeing the tiny village in eastern Ukraine, one resident said.

The chaotic scenes in Zaliznychne took place the day before a small group of Ukrainian troops appeared.

“They asked me where the Russians had lived and where they hid their armoured vehicles,” said Dmytro Hrushchenko, 43, standing on a dusty street with a neighbour, looking tired.

“I went outside and showed them: there, there and on the street over there,” he said, gesturing to the right, left and in front of him.

The testimony offered a rare sense of what has been unfolding, largely out of sight, across dozens of towns, villages and even cities in the Kharkiv region, as a daring Ukrainian military offensive recaptures swathes of territory from Russian control in a lightning advance.

In Zaliznychne, a poor, rural village, surrounded by fields and a railway track, residents appeared dazed.

The significance of what just happened barely three days earlier was still sinking in.

Speaking on Sunday, Vasyl, 83, said he had lived through the Second World War and then more than six months of hell under the Russians.

“It was like hard labour,” he said, leaning on a rusty bike, which rattled when it moved because of a set of colourful beads in the spokes.

“I used to be healthy but now I have problems with my heart. My wife is disabled, she has diabetes. We had no medicine… I still can’t believe they have gone and we are out of this period of death.”

Officers recalled the scenes of murder, torture and rape found after Russian forces were beaten back from the town of Bucha, outside Kyiv, in March. That was after just one month of occupation. Large parts of the Kharkiv region were under Russian control for six times longer.

“According to our information, in almost every village we have war crimes,” Serhii Bolvinov, the Kharkiv regional police chief told Sky News, standing outside one house in Zaliznychne that has become a crime scene.

“We are checking the places where they have been reported and will investigate all of them.”

His team marked a safe path through a patch of overgrown grass to the front gate of the crumbling property, wary of the possibility of Russian mines or boobytraps.

Treading carefully, the investigators and two grave diggers filed into a walled-off garden around the semi-detached house.

A woman who still lives there gestured to a patch of disturbed earth where the bodies of two men, one of them her next-door neighbour, are buried.

Maria Hryhohora, 63, had found them shot dead in the house in the first days of Russia’s invasion, but the police had been unable to reach her at that time because Russian troops had already sealed off the village.

Officers instead advised her to bury the bodies, but they kept a record of the suspected war crime to investigate as soon as it became possible.

Analysis: How Ukraine blew a devastating hole in Russia’s defences – with minimal fanfare

As the police team started work digging up the bodies, Maria spoke about how she had found the two men, her neighbour, Ilham Mehteev, and a friend of his called Konstiantyn Pohorelov who had come over.

They had been shot dead and were lying in the house in a large pool of blood.

“It was scary, very, very scary,” she said, her hair covered by a bright red scarf. She did not know why the men had been targeted.

Maria described how life during the occupation made an already tough existence even harder.

She showed Sky News her half of the shared property, a small, single-storey home, its windows boarded up to protect glass that has already been shattered.

Shrapnel from an explosion had torn holes in the front door. There was also blast damage inside, with a chunk torn out of the wooden cover for a mirror in the cramped hallway.

Maria lives in darkness because there has been no power in the village since April. She said she is worried about the coming winter and about the possibility of the Russians returning.

After about an hour or so, the police finished their work in the garden, loading the two bodies in white body bags into the back of a van for a forensic examination.

Their convoy of official cars then moved on to an industrial site on the outskirts of the village where they have been told of another corpse.

The victim, thought to have been a security guard, was also killed during the first days of the war on around the 26 or 27 February, as Russian forces advanced, one police officer said.

His body was left to rot, on the top platform of a high, yellow-coloured, metal structure, erected next to large mounds of asphalt.

Police said they did not know why he was killed. They climbed up several flights of rickety stairs to reach the corpse, one official retching at the smell.

As carefully as possible, they put the body into a body bag and brought it down, also laying it in the van.

A final stop was at a nearby house.

In the back garden was another makeshift grave.

Outside on the street, a couple approached the police. The man, Vasyl Boronov, 55, was the victim’s brother. He said his name was Serhii.

He too said he had no idea why his brother was killed, breaking down in tears as the police began their work.