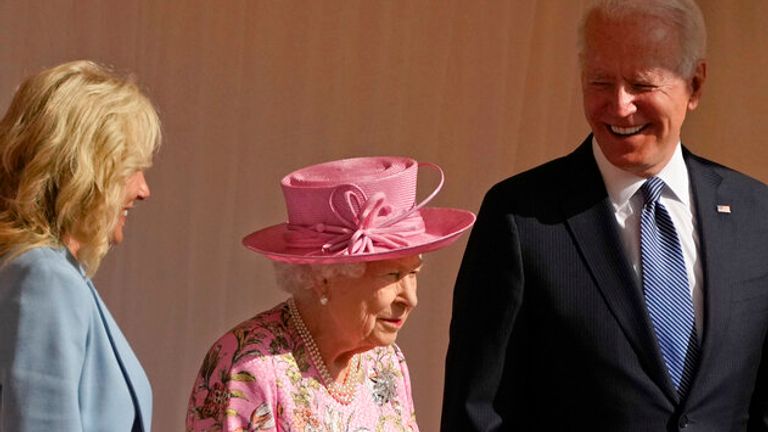 Joe Biden, the US President, has confirmed that he will attend the Queen’s funeral in the UK.

Although no plans have been made for Her Majesty‘s burial, it is expected that the ceremony will take place within 10 working days of her death.

The monarch, aged 96, died at home in Balmoral (Scotland) on Thursday, surrounded by her family.

From all over the globe, tributes have been flooding in to the sovereign, including from Mr Biden who described her as “stateswoman with unmatched dignity, constancy”

As he boarded Air Force One Friday morning, the president stated that he would attend the funeral but did not provide any details.

He said that he had not spoken to Kings Charles III in the past two years, adding: “I know him, but I haven’t spoken to him. I didn’t call him yet.”

The Queen had met all American presidents since Dwight Eisenhower except Lyndon Johnson, who did not visit Britain during his presidency.

In a Statement, Mr Biden, First Lady Jill Biden stated that the Queen’s “legacy” will be prominent in British history and the story of the world.


The president has pledged his attendance at the funeral of the monarch, but other world leaders are not as forthcoming.

According to a Kremlin spokesperson, it does not appear that Russia’s President Vladimir Putin will attend the ceremony.

After the tragic news, Vladimir Putin sent King Charles a Telegram in which he offered his condolences as well as wishing him courage and perseverance in the face “irreparable” loss.

“She was treated with respect in Russia as anywhere else in the world. She was respected for her wisdom and international authority. These qualities are rare on the international stage.

He said that it was not known if a Russian representative would need to attend any events for Queen Elizabeth II, as UK-Russia relations are at a low point due to the conflict in Ukraine.

“All of this should be made public by the Royal Court and British authorities,” said Mr Peskov.

“She defined an era” – World leaders pay tribute to Queen

Daily guide to what happens up to Elizabeth II’s funeral

Turkey’s President Recep Tayyip Erdan said that he would be happy to attend the funeral of Her Majesty, provided his schedule allows.

According to him, he had met the Queen twice at Buckingham Palace and that he knew her well. He also expressed his deepest sympathy to the royal family.

Erdogan stated, “If we have the chance, we would love to be there at this ceremony.”

Emmanuel Macron is one of the people expected to attend Queen Elizabeth’s funeral.

What happens to the Queen after her death?

After the death of the monarch, the French president expressed deep sadness and an empty feeling and thanked her for her “great love” for France.

M. Macron stated in a video message that the Queen had “mastered our language, loved our culture, and touched our hearts”.

He described her as a “great headof state”, adding that France and Britain had formed a “warm, sincere, and loyal partnership” during her reign.

M. Macron spoke in English and said that she was “your Queen”. She was The Queen to us.

Japan’s Emperor Naruhito plans to attend the funeral, and may be accompanied by Prime Minister Fumio Kishhida, Japanese media reported.

This would be the first overseas trip of the Emperor since May 2019, when he was elected to the throne.

Empress Masako also expressed her desire to attend, and the Japanese government has arranged their trip, NTV and TBS, and other media reported on Friday, citing government source.