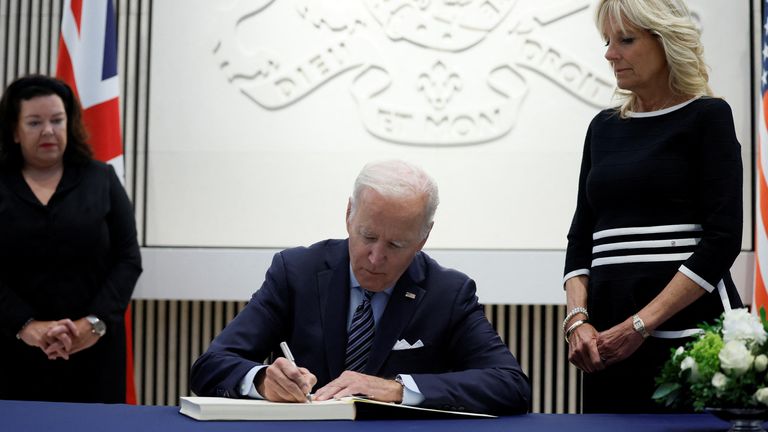 Leaders around the world have paid tribute to the Queen, with Joe Biden saying she was more than a monarch – “she defined an era”.

As they did so, landmarks across the globe shone in red, white and blue or went dark as a mark of respect, and flowers and wreaths were laid at UK embassies where flags flew at half-mast.

The Queen’s death was felt keenly around the world, but especially so in the 14 other realms where she was head of state.

Those nations, including Australia, Canada, New Zealand, Jamaica and other Caribbean nations, Tuvalu, Solomon Islands and Papua New Guinea, now have Charles as their King.

In Washington DC, where the American flag was lowered to half-mast on public buildings, the US president said “in a world of constant change, she was a steadying presence and a source of comfort and pride for generations of Britons”.

Mr Biden said she was a “stateswoman of unmatched dignity and constancy” who “helped make our relationship special”.

In his statement, the president said the Queen “charmed us with her wit, moved us with her kindness, and generously shared with us her wisdom” when he and the first lady visited last year.

“Her legacy will loom large in the pages of British history, and in the story of our world,” he added.

In New York, billboards in Times Square displayed the Queen’s portrait, flowers were laid outside the British Consulate General, the Empire State Building was bathed in purple light and at Tea & Sympathy, a restaurant selling classic British favourites, people came for a cup of tea as a way of paying their respects.

“It’s like your mum died, because we’ve grown up with her, and her family,” Nicky Perry, the restaurant’s owner, said. “I’ve had so many people turn up here today in floods of tears. Men. Americans.”

At the US Open tennis tournament, fans and players held a moment’s silence before the start of the women’s semi-final.

Canadian Prime Minister Justin Trudeau tweeted: “It was with the heaviest of hearts that we learned of the passing of Canada’s longest-reigning Sovereign, Her Majesty Queen Elizabeth II.

“She was a constant presence in our lives – and her service to Canadians will forever remain an important part of our
country’s history.”

Speaking to reporters, he added that the Queen was “one of my favourite people in the world”.

More on the Queen:
A ‘selfless monarch’ who made Britain proud
Six moments that defined the Queen’s reign
The Queen’s most memorable quotes
A life of service in pictures

In Australia, plans were announced to illuminate the sails of the Sydney Opera House, but the Queen’s passing also revived a longstanding debate among republicans on ending the country’s association with the 1,000-year-old instution.

“This is a loss we all feel, for few have known a world without Queen Elizabeth II. In her seven remarkable decades on the throne, Her Majesty was a rare and reassuring constant amidst rapid change,” he said on Twitter.

“Through the noise and tumult of the years, she embodied an exhibited a timeless decency and an enduring calm.”

Adam Brandt, the leader of the Greens Party in Australia and a prominent republican, was accused of being disrespectful, even by some fellow republicans, after he said: “Our thoughts are with her family and all who loved her. Now Australia must move forward.”

In New Zealand, a performance of the Haka by a group of young people at the Auckland War Memorial was one of many tributes paid.

Prime Minister Jacinda Ardern said she was woken up in the early hours of the morning by a police officer shining a torch into her bedroom to tell her that the Queen had died.

“When that torch light came into my room I knew immediately what it meant,” Ms Ardern said.

She said that like many other people, she was feeling not only deep sadness but also deep gratitude.

Ms Ardern said: “The last days of the Queen’s life captures who she was in so many ways – working until the very end on behalf of the people she loved.”

Bermuda premier David Burt noted that her reign “has spanned decades of such immense change for the United Kingdom and the world”.

Jamaican Prime Minister Andrew Holness said that since the Queen was crowned in 1953, she had visited the island every decade until 2002.

He added that the Jamaican flag will be flown at half-mast on all public buildings for 12 days in tribute.

Papua New Guinea’s prime minister, James Marape, said she was fondly known as “Mama Queen because she was the matriarch of our country”.

Tuvalu’s acting prime minister, Simon Kofe, said: “We were fortunate to have the Queen visit us… and we recognise her incredible commitment to service.”

Irish Prime Minister Micheal Martin said: “Her state visit to Ireland in 2011 marked a crucial step in the normalisation of relations with our nearest neighbour. That visit was a great success, largely because of the many gracious gestures and warm remarks made by the Queen.”

In Paris, the Eiffel Tower went dark at the stroke of midnight and President Emmanuel Macron posted on social media: “Her Majesty Queen Elizabeth II embodied the British nation’s continuity and unity for over 70 years.

“I remember her as a friend of France, a kind-hearted queen who has left a lasting impression on her country and her century.”

Ukrainian President Volodymyr Zelenskyy tweeted: “On behalf of the Ukrainian people we extend sincere condolences to the @RoyalFamily, the entire United Kingdom and the Commonwealth over this irreparable loss. Our thoughts and prayers are with you.”

In Berlin, flowers and candles were laid outside the British embassy and Chancellor Olaf Scholz said: “We mourn Queen Elizabeth II. She was a role model and inspiration for millions, including here in Germany.

“Her commitment to German-British reconciliation after the horrors of World War II will not be forgotten. She will be missed, not least her wonderful sense of humour.”

Queen Margrethe II of Denmark, whose 50-year reign is now the longest in Europe, called the Queen “a towering figure among European monarchs and a great inspiration to us all”.

UN Secretary General Antonio Guterres said that “as the United Kingdom’s longest-lived and longest-reigning head of state, Queen Elizabeth II was widely admired for her grace, dignity, and dedication around the world”.

He added that she had been “a reassuring presence throughout decades of sweeping change, including the decolonization of Africa and Asia and the evolution of the Commonwealth”.

Russian President Vladimir Putin said he extended his condolences to Britain for the “irreparable loss” of the Queen.

Chinese President Xi Jinping expressed his condolences to the Royal Family, noting that the Queen was the first UK monarch to visit China, in 1986, and added: “Her death is a great loss to the British people.”

Pope Francis said he was deeply saddened by the Queen’s death and offered his condolences to her family, including her successor, King Charles.

The pontiff said in a telegram to the King: “I willingly join all who mourn her loss in praying for the late Queen’s eternal rest, and in paying tribute to her life of unstinting service to the good of the Nation and the Commonwealth.”

Indian Prime Minister Narendra Modi said: “Her Majesty Queen Elizabeth II will be remembered as a stalwart of our times.

“She provided inspiring leadership to her nation and people. She personified dignity and decency in public life.

“Pained by her demise. My thoughts are with her family and people of UK in this sad hour.”

Pakistani Prime Minister Shebaz Sharif said he was “deeply grieved at the passing of Her Majesty Queen Elizabeth II. Pakistan joins the UK & other Commonwealth nations in mourning her death. My heartfelt condolences to the royal family, people & government of the UK.”

Ghanaian President Nana Akufo-Addo said: “The Ghanaian people have very fond memories of the two visits she made to Ghana during her reign, and, on both occasions, we remember the friendliness, elegance, style and sheer joy she brought to the performance of her duties.”

South African President Cyril Ramaphosa paid tribute, saying: “Her Majesty was an extraordinary and world-renowned public figure who lived a remarkable life. Her life and legacy will be fondly remembered by many around the world. The Queen’s commitment and dedication during her 70 years on the throne remains a noble and virtuous example to the entire world.”

Nigerian President Muhammadu Buhari said: “The story of modern Nigeria will never be complete without a chapter on Queen Elizabeth ll, a towering global personality and an outstanding leader. She dedicated her life to making her nation, the Commonwealth and the entire world a better place.”

On European Union buildings around Europe, EU flags were lowered to half-mast.

European Commission president Ursula von der Leyen said on Twitter that the Queen had “witnessed war and reconciliation in Europe and beyond, and deep transformations of our planet and societies”.

“She was a beacon of continuity throughout these changes, never ceasing to display a calmness and dedication that gave strength to many. May she rest in peace.”

And European Council President Charles Michel said “she never failed to show us the importance of lasting values in a modern world with her service and commitment.”

In Venice, “God Save the Queen” was played outside the Italian city’s Festival Buildings.

In Brazil, the giant statue of Christ the Redeemer overlooking Rio de Janeiro was lit up in the red, blue and white as the country announced three days of national mourning “as a sign of sorrow”.

Former US presidents Barack Obama, Donald Trump, Bill Clinton and George W Bush were also among those who released statements.

Mr Obama said: “Time and again, we were struck by her warmth, the way she put people at ease, and how she brought her considerable humour and charm to moments of great pomp and circumstance.

“Like so many, Michelle and I are grateful to have witnessed Her Majesty’s dedicated leadership, and we are awed by her legacy of tireless, dignified public service.”

Mr Trump said: “She will always be remembered for her faithfulness to her country and her unwavering devotion to her fellow countrymen and women.”