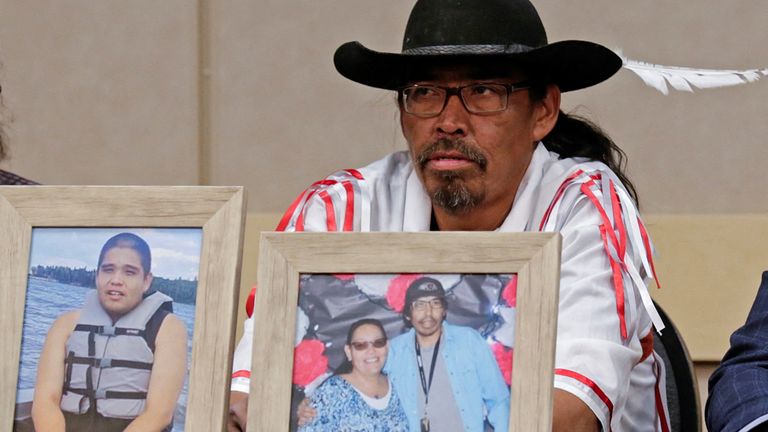 The final suspect in the recent mass stabbings in and around a Canadian reserve has died after being run off the road, police have confirmed.

Myles Sanderson, 32, was found near the town of Rosthern, in the central Saskatchewan province, as officers responded to reports of a stolen vehicle being driven by a man armed with a knife, the Royal Canadian Mounted Police (RCMP) said.

Officers rammed Sanderson’s vehicle off the road into a ditch, and he was taken into custody, but went into what a spokeswoman described as “medical distress”.

He was taken to hospital, but died shortly afterwards.

Ten people were killed and 18 injured after the attacks in and around the James Smith Cree Nation, an indigenous community in the central Saskatchewan province, on Sunday.

Ten victims remain in hospital, three of them in a critical condition.

At a press conference confirming Myles Sanderson’s death, RCMP assistant commissioner Rhonda Blackmore said she had been to visit James Smith Cree Nation, home to nine of the ten victims, and said many of them had “witnessed incredible trauma”.

“Many people haven’t slept,” she said. “They told me, ‘every time I close my eyes, I hear noises’.

“I hope this gives them some sense of closure, and that they can rest easier tonight knowing Myles is no longer at large.

“I hope now they are able to start healing.”

Hundreds of police officers undertook an extensive manhunt for suspects, Myles and his brother Damien Sanderson, who had fled the crime scenes.

Damien was found dead in a grassy area of James Smith Cree Nation on Monday, with injuries police said were not self-inflicted.

Myles Sanderson, who officers described as armed and dangerous, remained on the loose until Wednesday afternoon.

The stabbing rampage on Sunday was one of the deadliest attacks in Canada’s modern history.

Police said some of the victims appeared to have been deliberately targeted, while others were attacked at random.

Officers have not revealed a possible motive, but a statement from an indigenous group from the province suggested the stabbings could be drug-related.

But Ms Blackmore said: “Unfortunately now that Myles is deceased we may never have an understanding as to that motivation.”

Questions are beginning to be asked about why Myles Sanderson – with 59 convictions and a long history of violence – was out on the streets.

The 32-year-old was released by a parole board in February while serving a sentence of more than four years on charges that included assault and robbery. But he had been wanted by police since May, apparently for violating the terms of his release.