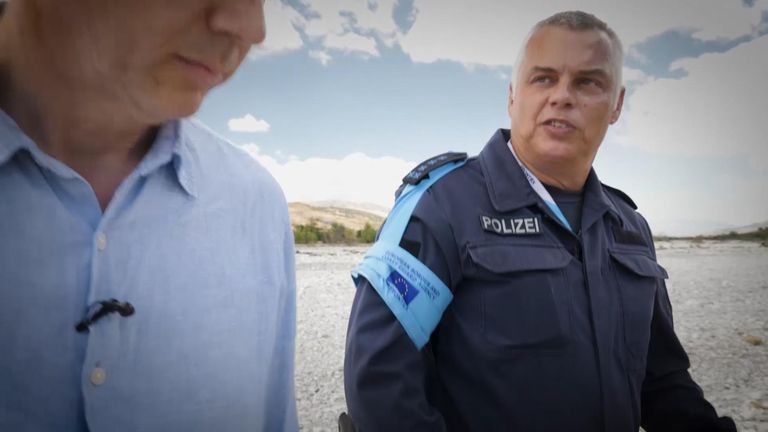 There are places in Albania that are breathtakingly beautiful, blessed with soaring peaks, turquoise water or lush forests.

And sometimes, all three at once.

On this day, we are walking across a dried river bed, the sun beating down and the mountains ahead of us.

On the other side of the ridge is the line where Albania stops and Greece begins.

And, of course, when you reach Greece, you’ve also entered the European Union, where visitors can roam fairly freely.

That’s why this border region, of concealed paths and dense forests, has long been associated with smuggling, gun-running, people trafficking and all the other types of grim cross-border crime.

Just within sight, coming closer all the time, are a cluster of battered tents.

Because this isn’t a story about tourism, but about borders, crime and a country’s desperate attempt to escape its own reputation.

Alongside me is Christian Winkler, a German police officer who now finds himself striding across this sea of pebbles.

“This morning, we saw these tents from up there,” he says, pointing up at some buildings set among the woods on the side of the mountains. “One tent is not suspicious but five or six is worth coming to look at.”

As we approach, Mr Winkler, an experienced and thoughtful man, unclips the gun on his belt, but allows Albanian officers to lead the way. If there is an arrest to be made, it’ll be down to them.

But there isn’t. People have been here, but now the tents are empty. The mice have evaded the cats.

The Frontex team in Albania includes officers from Germany, Romania, Croatia, Hungary and beyond.

They are there to offer experience and support, but also as a demonstration that the EU values its borders.

“We work very well with our Albanian colleagues,” says Cristian Crainic, who is from Romania.

“Every border is very important to the European Union. We must have secure borders.”

And so it is that we watch as buses are decanted of their passengers, scanned and then inspected with specialist equipment, while suitcases and backpacks are similarly scoured.

There was a time, so we’re told, when this frontier leaked like an old hosepipe, but not now.

The question, though, is whether problems have been solved or simply displaced.

The lessons from Britain might suggest the latter. For a start, Albania’s sorry reputation as a nexus of crime is demonstrated by London’s drugs trade, in which Albanian gangs are prevalent.

And there’s people smuggling. A few years ago, the number of Albanians crossing the Channel in small boats was in the dozens. It rose and rose and has now exploded.

Over the first six months of this year, about one in six people arriving in Britain on a small boat was Albanian; since then, according to former home secretary Priti Patel, it has risen stupendously so that most arrivals over the past couple of months – around 60%, she says – have come from Albania.

Some of these will, of course, be legitimate asylum seekers. But Albania is not at war – it’s hard to avoid the conclusion that most of this influx are economic migrants, not refugees.

So what’s causing this rush?

“There are pull and push factors for the Albanians,” said Saimir Boshnjaku, director of Albania’s immigration police force.

“The UK is an attractive country for a lot of reasons. The smugglers are trying to find the weakest point in the system so we have to find the other way to prevent them and to put them before the justice – the people that are dealing with the trafficking or the smuggling of people and to send them before the court.

“Some people are abusing the system when they ask for asylum. They are going there for a better life. Maybe they have some friends or relatives, but they are going for economic reasons – to have more money in their pocket.”

And what of the criminal gangs who organise the people smuggling, brazenly offerings their trips on social media posts?

“The TikTok videos are marketing,” he tells me with a slight shrug. “They need to find as many people as possible in order to make money.” The battle with criminal gangs, he says, is common around the world.

And yet it does ferocious damage to the reputation of Albania. The people I met here could not have been more welcoming or warm, but the world’s opinion of this nation is laced with a chronic mistrust built by the actions of Albanian criminals.

On the night we arrive in Tirana, the bustling capital, preparations were being made for a free concert by Rita Ora – who was born in Kosovo to Albanian parents, but was taken to London as a refugee in infancy.

She remains a hero in Albania, taking to the stage in a gown showing the national flag and speaking of her adoration for the country.

“She is a world star and we are so proud of her,” one concert-goer told me. He loved her, and he also loved Britain, a country with “a good economy and a good society”.

“Everybody would like to go there,” came the reply.

Albania is a quandary. A country that sits in Europe, but is little known; a nation that wants to work with its neighbours and expand its horizons, but is still held back by both reputation and its own poverty (the average Briton earns six times more than the average Albanian).

Of the 10 million Albanians in the world, two-thirds live outside the country.

It is a nation that knows about migration and hankers for a better life.

Perhaps it’s no surprise that people drift away from this country, and off towards the beaches of northern France, in search of a passage across the Channel.