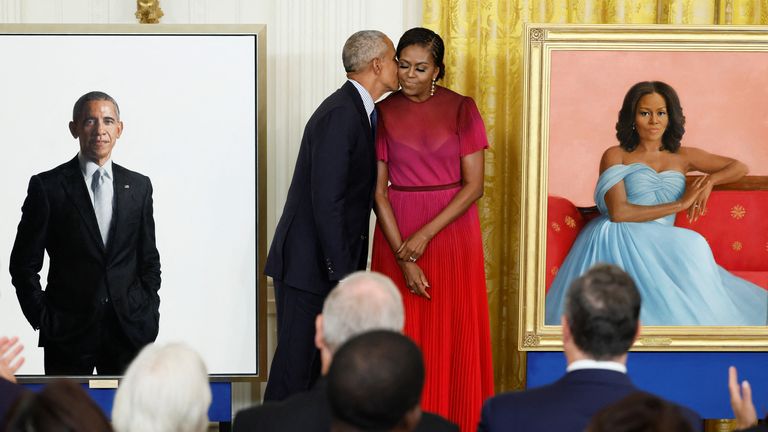 Barack Obama and Michelle Obama returned to the White House to unveil their official portraits.

Joe Biden, his vice president, hosted Obama and his wife more than five years after he had completed his second term.

Robert McCurdy has painted the portrait of the former commander-in-chief in a photorealistic style.

His portrait is set against a white background. It recalls the previous portraits that McCurdy took of Nelson Mandela and Toni Morrison.

In a painting by Sharon Sprung, the former first lady is seen in a blue gown in the White House’s Red Room.

He added: “I want Sharon Sprung to thank for capturing all I love about Michelle, her grace, intelligence and the fact she’s fine!” Her portrait is breathtaking.

“And I would like to thank Robert McCurdy, for taking on a more difficult topic and doing a great job with my.”

He said, “With Barack as our President, we got up each day and went to work filled with hope.

“Mr. President, nothing could have prepared for me better to be president of the United States than being at your side for eighteen years. And that is what I mean from the bottom.

Obama stated that it was great to be back and added that Mr Biden had “guided” him through “some perilous times”.

He continued, “When people ask what I missed most about the White House Years it isn’t Air Force One that they talk about.”

Former president, whose second term ended in January 2017, said, laughing, “although Air Force One is my favorite”.

He was accompanied by some of his former colleagues. He said that he regretted the chance to have to stand shoulder-to-shoulder with everyone.

Walls, corridors, and rooms throughout The White House are decorated with large, formal portraits depicting US presidents and first wives.

Although it is common for former presidents to attend the unveilings, Donald Trump didn’t hold one while he was in the top job.