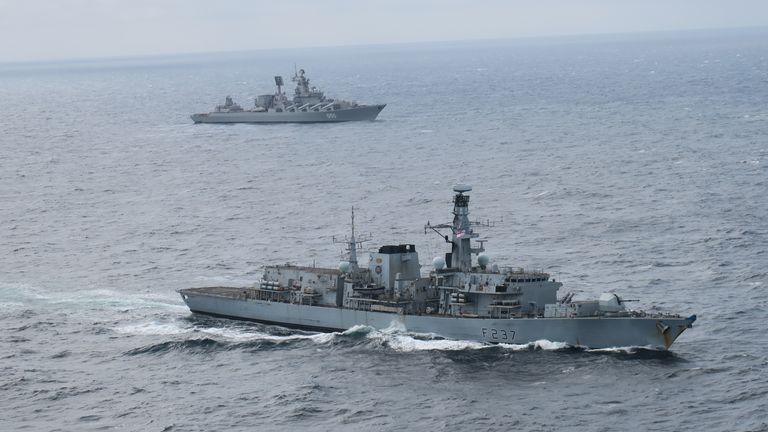 As the Russian Navy Task Force passed through waters near the UK, three Royal Navy warships accompanied it.

HMS Westminster and HMS Lancaster, all Type 23 frigates tracked Marshal Ustinov, a Russian-class cruiser of the Slava-class, as he returned to Russia from supporting President Vladimir Putin’s invasion in Ukraine.

Marshal Ustinov was accompanied on his journey by Vice-Admiral Kulakov, a Udaloy-class destroyer, and tanker Vyazma.

This cruiser is the sister ship to Moskva. Russia claims it sank in a storm following a fire that detonated ammunition aboard.

Commander Ed Moss Ward, HMS Westminster’s CO, stated that maritime security in the UK’s sea areas is critical to our resilience and prosperity.

“Escorting a Russian task force has shown that the Royal Navy is committed both to maritime security and cooperation with NATO allies,”

HMS Westminster was deployed from Portsmouth to intercept Russian ships in the Celtic Sea. Marshal Ustinov was then refueled by the tanker Vyazma.

HMS Richmond remained on guard in the English Channel.

“Exchanging personnel further strengthens NATO cohesion, interoperability, so that the alliance can quickly and efficiently respond to any threat.

“Lancaster’s team works extremely hard to ensure that we are always prepared to respond to any threat at any time.”