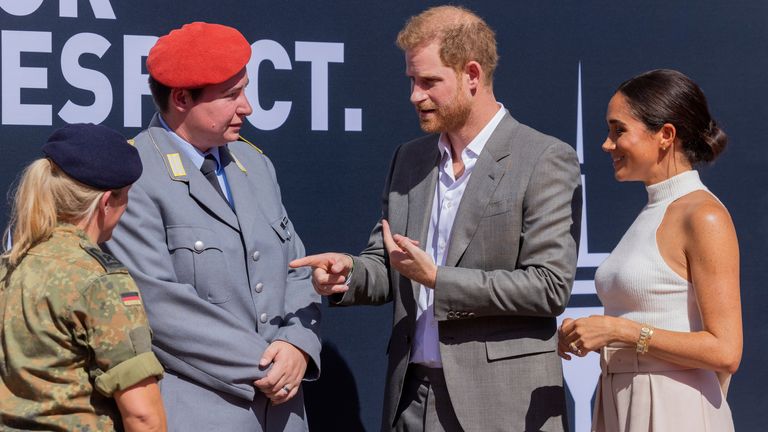 The Duchess of Sussex says she was an “ugly duckling” at school who never had anyone to sit next to at lunch.

The former actress, 41, also said she was a “bit of a loner and really shy” and struggled to fit in.

Meghan, who has been visiting Dusseldorf with Prince Harry, where the Invictus Games will be held in a year’s time, spoke about her early years in her latest Archetypes podcast called The Stigma of the Singleton with Mandy Kealing.

Ms Kealing, who decided to have two children on her own without a partner, asked Meghan: “Were you not the pretty one growing up?”

“What? That is news to me,” Kealing exclaimed.

Meghan went on: “Ugly duckling. Ya no… maybe not conventional beauty, now maybe that would be seen as beautiful, but massive, frizzy, curly hair and a huge gap in my teeth.

She added: “I never had anyone to sit with at lunch. I was always a little bit of a loner and really shy, and didn’t know where I fit in.

Kealing said her impression of Meghan was of the “one nice hot girl who has her head screwed on”.

Meghan replied: “No, it was really hard.”

Meanwhile, she and Prince Harry have been meeting officials and potential competitors ahead of next September’s Invictus Games.

The event was founded by the duke to help the rehabilitation of sick and injured military personnel.

The couple, who live in California, smiled brightly at onlookers who had gathered at Dusseldorf’s Town Hall.

A ship called the MS Rhein Galaxie, which they were expected to be on, took a trip down the River Rhine, a small German police boat slightly ahead of it.

On the top deck were a number of Invictus competitors and their family and friends, with the vessel flying the official flags of the games.

This year’s Invictus Games – the first for three years – were held in April in The Hague.

A camera crew filming for a Netflix documentary called Heart Of Invictus followed the couple and those competing at the event.

On Monday evening, before travelling to Germany, the duchess told young leaders from around the world that “you are the future, you are the present” in her first UK speech since stepping back as a senior royal.

Prince Harry was also present as Meghan gave a short address at the opening ceremony of the One Young World summit at Bridgewater Hall in Manchester.

The Sussexes’ attendance at the ceremony was their first UK public appearance since the Queen’s Platinum Jubilee in June.

Last week, Meghan gave another tell-all interview, claiming she and Prince Harry were “happy” to leave the UK because “just by existing, we were upsetting the dynamic of the hierarchy”.

Speaking to New York Magazine’s The Cut, Meghan said the couple were prepared to go anywhere in the Commonwealth to escape their life in Britain and were considering Canada, New Zealand and South Africa before actor and filmmaker Tyler Perry offered them a home in California.