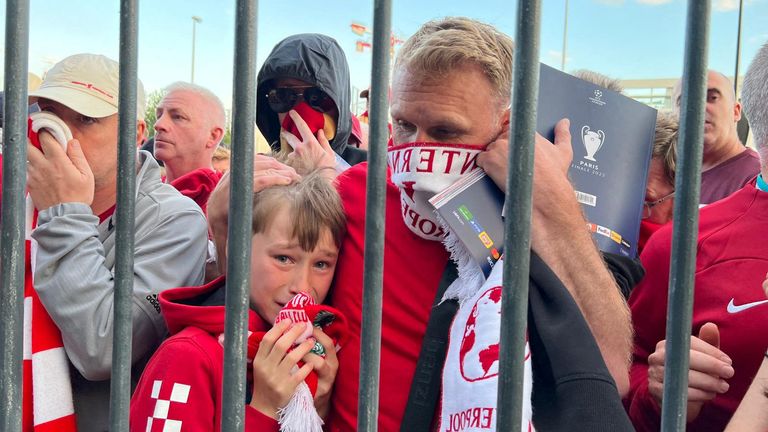 Liverpool have warned fans they could be “targeted for theft, robbery, or assault” in Naples ahead of the club’s first Champions League match of the season.

With the Reds’ opening group game against Napoli set to kick off on Wednesday evening, the club issued a series of recommendations, including advising fans not to wear team colours when travelling.

It is the Merseyside team’s first match in the competition since chaotic scenes unfolded outside the Stade de France in May, where they lost to Real Madrid in last season’s final.

Fans were sprayed with tear gas and funnelled through a bottleneck close to the stadium.

With that experience still fresh in supporters’ minds, Liverpool managing director Andy Hughes said he understands the “trip may be a daunting prospect”.

Twitter account Liverpool FC Help posted a series of recommendations, one of which urges fans to “remain in their respective hotel to drink and eat”.

It added: “Fans should not congregate in public areas and should avoid becoming isolated in areas away from the port area of the city.

“We strongly recommend you avoid the city centre. If you choose to visit, please beware that you may be targeted for theft, robbery, or assault.”

Mr Hughes said fans had “faced a number of issues when travelling to Naples in the past”.

He advised supporters not to make their own way to the stadium “in the interest of personal safety” and board official coaches instead.

Mr Hughes said: “Look, I do understand that some fans will want to make an occasion out of this trip.

“However, in this case I’d urge supporters not to wander into the city on their own, or to be wearing club colours during their stay in Naples.”

Manager Jurgen Klopp, in the pre-match press conference, snapped at a reporter who asked him whether he believed the city was dangerous.

“That’s an embarrassing question from you,” a visibly angry Klopp said. “You want to create headlines. I really don’t understand it.

“Are you from Napoli? Do you think it’s a dangerous city? I don’t know. I don’t live a normal life in Napoli. I am protected here, go to the hotel and now you ask me what I think about Napoli.”

“Nothing to do with the city, so I don’t know. But I am not here to create headlines for you.”