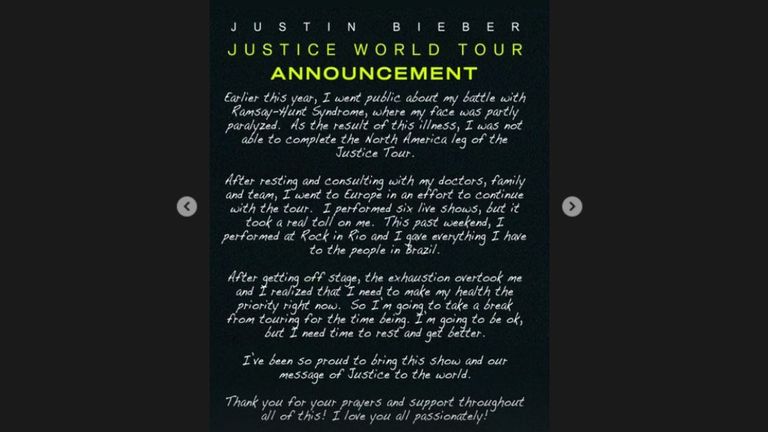 Justin Bieber has announced he is taking a break from his rescheduled world tour to “rest and get better”.

The Canadian singer revealed in June he had been diagnosed with a rare condition called Ramsay Hunt syndrome that had resulted in complete paralysis of the right side of his face, forcing him to cancel performances.

Writing on Instagram, 28-year-old Bieber said he had been back on stage but doing six live shows since his diagnosis “took a real toll on me”.

He said: “This past weekend, I performed at Rock in Rio and I gave everything I have to the people in Brazil.”

But exhaustion “overtook” him, he added, and after talking to his doctors, family and team, he has decided to prioritise his health over his work.

“I’m going to take a break from touring for the time being,” the music star explained.

“I’m going to be okay, but I need time to rest and get better. I’ve been so proud to bring this show and our message of justice to the world.”

He thanked fans for their support and finished his message by saying: “I love you all passionately!”

The star did not say when he would be back.

There were 70 shows in the diary until March 2023 in South America, Asia, Australia, New Zealand and Europe.

Ramsay Hunt syndrome is a complication of the shingles virus which can emerge in people who have suffered chicken pox as a child.

The NHS says it is caused by a virus in the facial nerve.

Possible symptoms include blisters in the ears and on the roof of the mouth, as well as facial weakness.

It can be treated with steroids, antiviral medication and facial rehabilitation.