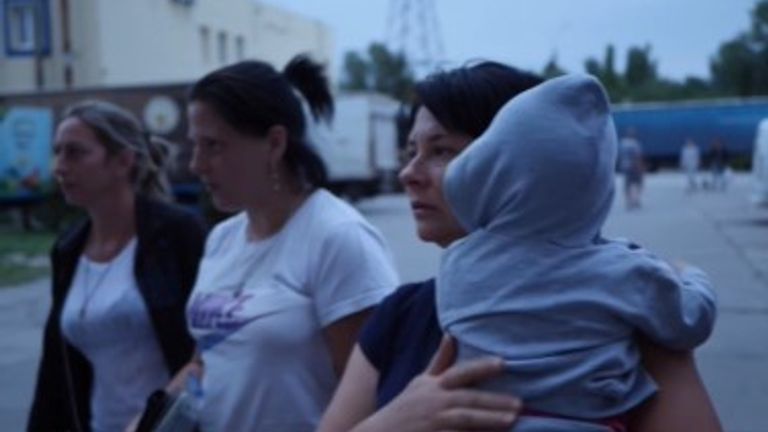 The ground shook and smoke chugged into the air as Ukrainian missiles smashed into a key bridge in a city controlled by Russian forces as families waited to flee, witnesses said.

A major Ukrainian offensive to retake the southern city of Kherson has prompted a rise in women and children wanting to escape the port city and surrounding area, according to volunteers helping people to leave.

Their hope is to return once the region is back in Ukrainian hands.

“Everyone understands a serious fight is coming for Kherson city,” said one volunteer driver, who asked to be anonymous.

He said a core concern was that Russian forces would obliterate Kherson if forced into a retreat. He drew a comparison with how Russian troops destroyed the southern city of Mariupol, conversely while capturing it from the Ukrainian side in the first months of the war

“I think every person with a clear mind understands it is better to leave and wait somewhere else during this period, especially if you have children,” the volunteer said.

“We don’t want a second Mariupol or something similar. But if that happens to Kherson, then why wait inside the city? Better to move out and wait outside.”

Ukraine has ordered an information blackout since it launched what could be the most pivotal offensive of the war so far last Monday.

Officials have used social media to make only the merest of hints about the fighting that is thought to be raging from several directions in rural areas surrounding Kherson city.

A photograph said to be posted by government-backed accounts on Sunday night showed a Ukrainian flag being hoisted above the town of Vysokopillya, in Kherson region, to the south of Kryvhi Rih, one of the cities in southern Ukraine from where the offensive is taking place.

It means that eyewitness accounts from people fleeing the area are among the only independent testimonies to emerge of what is unfolding.

The volunteer driver, 58, who is from Kherson city, said he started to transport Ukrainian evacuees to a refuge centre in a city more than 100 miles to the northeast about a month ago – a service he said is in increasing demand.

“Many people want to leave,” he said. “Even those people who didn’t want to go a week ago are now asking and looking for ways how to escape.”

He claimed Russian families who were moved into Kherson by the occupiers after they seized the city in the first days of the war were also trying to retreat, seeking to move into other parts of Russian-held Ukraine such as Crimea.

“We start to see they [the Russians] move their families out – children, wives,” he said.

“They understand [what is coming]. They are not stupid… Russia cannot hold Kherson city, so there is only one thing left to do, and that is to leave.”

‘The ground was shaking’

Looking tired and drawn, the volunteer driver described what he saw in Kherson city on Thursday during his most recent rescue mission to extract Ukrainian women and children.

“The ground was shaking. Smoke was billowing up. How to describe it? In one word – war,” he said, speaking at the refuge hub in Zaporizhzhia, where he eventually brought them.

“When you see a flying missile in front of your eyes, falling down, I am not someone who is afraid, but the women and children were terrified,” he said.

The driver had been at one end of the Antonivskyi bridge, waiting to use a small ferry crossing over the Dnipro River to leave the city.

“We thought about turning around and going away from the crossing. But the desire to leave the territory was so strong that the mothers agreed to wait.

The ferry crossing has become the only way for people to exit or enter the city by vehicle after Ukraine targeted all bridges in recent weeks in a strategic move to cut off the Russian military’s supply lines, both in the build-up to the offensive and now that it is under way.

The driver said he and his passengers had to wait from 6am until 6.30pm to catch a ferry out, in part because of the missile strikes, but also because Russian forces were giving priority to loading their military vehicles on the vessel and across the river.

Even when they were finally allowed onboard, another strike thundered down as they were halfway across the water – accurately hitting the bridge and leaving the ferry unscathed.

“We prayed,” said the volunteer, who made multiple references to his Christian faith as a source of strength. “We were confident that God would save us… and it happened.”

One of his passengers, a 17-year-old boy, said the crossing was the scariest part of an epic, two-day journey to leave Kherson. It included spending the night in a village and being stopped and questioned at multiple Russian checkpoints.

“There were a lot of explosions,” the young man said. He had been travelling with his mother and two sisters. “We were afraid we even might not even be able to leave the city.”

Another mother, who took the bus with her young son, said she decided to flee Kherson when the Ukrainian offensive started, fearing what might happen if they stayed and became caught in the crossfire. She said her husband stayed behind to care for their elderly parents, who were too old and unwell to flee.

“I don’t know how to explain to you this fear inside,” she said, describing how she felt when the thud of war became more constant over the past few days.

“It became worse and worse, so we packed our things and left. It was difficult to leave our home, husband, animals, parents – difficult.”

The Ukrainian ground offensive, backed by Western weapons, appears to be focused on retaking towns and villages in the Kherson region, while using long-range precision strikes against Russian supply lines and ammunition depots around Kherson city.

Hampering Russia’s ability to sustain its troops with weapons, food and other supplies would force them to retreat, as happened in the battle for Kyiv during the early part of the war.

Retaking Kherson would be a huge coup for Ukraine and a major physical and psychological blow for Russia. But Russian commanders have reinforced their positions on the western bank of the Dnipro river in anticipation, potentially setting the stage for a fierce fight.