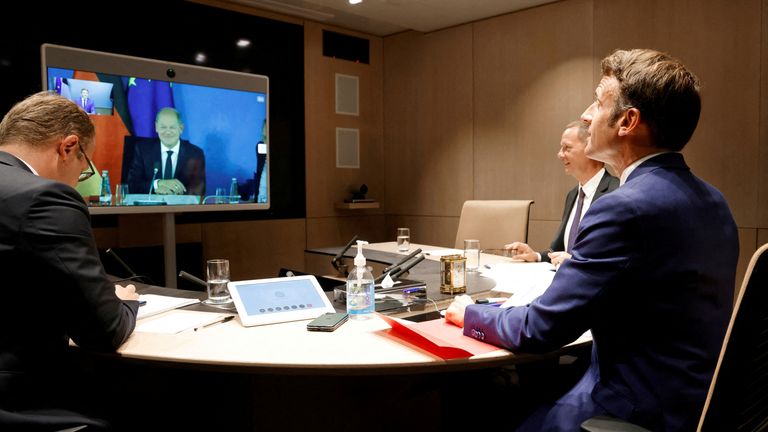 Emmanuel Macron stated that he would like to see a 10% reduction of France’s energy consumption in the next weeks and months. He also called on businesses and homes to reduce their energy use.

French President warned that energy rationing plans were being made for winter “in the event” that voluntary efforts are not sufficient.

Mr Macron asked people to turn down heating or air conditioning, stating that the “best energy” is that which they don’t consume and that forced cuts would only be considered an option.

After a virtual meeting with German Chancellor Olaf Scholz Mr Macron revealed a plan to increase gas supply from France to Germany in order to compensate for the drop in Russian gas supplies.

Germany is more dependent on Russian gas than other EU countries.

Macron stated that Germany would supply electricity to France in return for compensating for the shortages caused due to maintenance on French nuclear reactors.

On Friday, the leaders addressed an emergency meeting of EU energy ministers to discuss how the bloc can coordinate to keep winter warm in case Russia cuts off gas supplies.

Macron stated that France and Germany supported requiring energy companies make a “contribution to public coffers” in order to offset big profits from oil price spikes and gas price rises. He also suggested that Russia should be subject to a price cap for Russian gas.

He said that France is open to buying gas at an European level rather than a country-level, and called for EU policies to regulate energy prices.

The prices of wholesale gas rose Monday because Russia stopped gas flow via a major pipeline Nord Stream 1 last week, which runs beneath the Baltic Sea to Germany.

Europe accused Moscow of using energy supplies to retaliate for Western sanctions against it following its invasion of Ukraine.


Russia accuses the sanctions of causing problems with gas supply. The problem was due to a pipeline failure.

Nord Stream 1 has historically supplied around a third the Russian gas exported to Europe. However, it was only running at 20% capacity prior to last week’s maintenance outage.