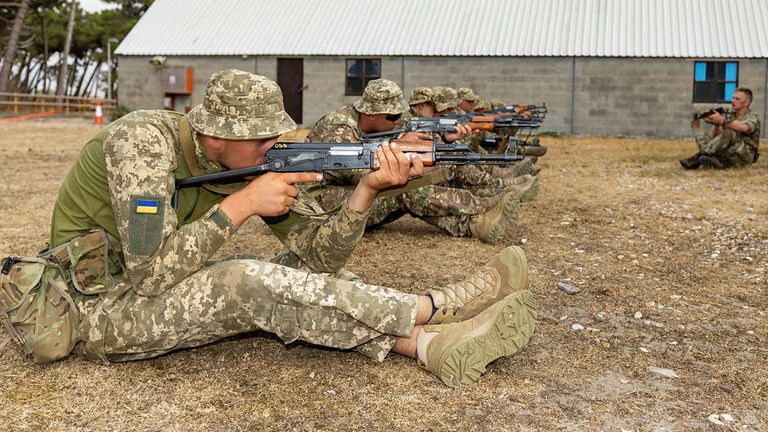 The UK is significantly expanding a training programme in Britain to turn potentially tens of thousands of Ukrainian citizens into frontline soldiers to fight Russia, Sky News has learnt.

The combat course is being extended in length to five weeks from three weeks, keeping more of the training in the UK, away from the threat of Russian missile strikes – a hazard for anyone learning how to become a soldier at sites inside Ukraine, it is understood.

Some 4,700 personnel have already been through the training at military bases in the north, southwest and southeast of England since it began in June, with commanders intending to continue the support for as long as Ukraine needs new troops to fight Russia’s invasion.

Military instructors from eight other countries, including New Zealand, Sweden and the Netherlands, have joined with their British counterparts to provide the expanded training mission.

Ben Wallace, the defence secretary, said it demonstrated “our shared resolve to support the Armed Forces of Ukraine”.

In quotes released to Sky News by the Ministry of Defence, confirming the expanded programme, Mr Wallace said the training course had “developed rapidly, and we are now extending it to five weeks to provide the best possible preparation for Ukrainian soldiers who will soon be in active combat operations”.

He added: “Meeting those citizen soldiers and witnessing first-hand their courage and determination is a humbling experience.

More on Ministry Of Defence

“We must do everything we can to help them defend their homes against this illegal and unprovoked Russian invasion, and will continue to do so for as long as it takes. We stand with Ukraine.”

Mr Wallace has paid four visits to check up on the training, including most recently on Friday.

A defence source said this was an indication that while “many politicians have been distracted by a summer leadership competition”, the defence secretary “only cares about keeping Ukrainians in their fight for national survival”.

If, as expected, Liz Truss becomes prime minister, Mr Wallace is tipped to retain his job as defence secretary.

The main course on offer is based on the UK’s basic infantry training. It includes weapons-handling, battlefield first aid, fieldcraft and patrol tactics.

The extra two weeks will allow for more advanced training, such as trench and urban warfare, vehicle-mounted operations, and battlefield exercises in simulated combat environments.

The training is being conducted by elements from the British Army’s 11 Security Force Assistance Brigade and the RAF Regiment, alongside international instructors.