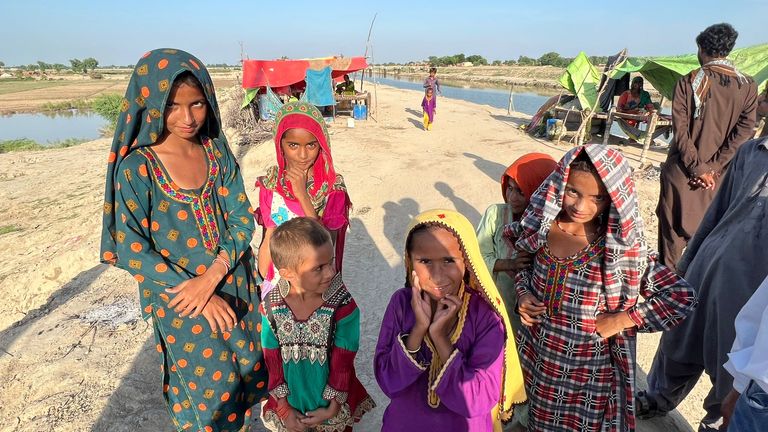 Officials from the south of Pakistan warned that there will be more flooding, as Lake Manchar is swelling due to unprecedented monsoon rains which have already killed almost 1,300 people.

Recent downpours have caused havoc and has been blamed for climate change.

More than 33 million people were affected by the floods. This is one in seven Pakistanis. Satellite images show the extent of the destruction caused by the flooding.


Sky News international correspondent Saima MOHSAN has witnessed the devastating effects of flooding firsthand in the same area of the country as more flooding is expected:

We have been trying to cover every angle over the last week and communicate what is happening here.

We wanted to show people how they live now, after their rescue, exodus and escape. We discovered a completely displaced neighborhood that had travelled from Manchar Lake to Dadu.

It was as if they had moved from their homes to make a new home in refugee camps. Although they are still neighbors, they live just a few blocks from each other.

Their village was flooded in just minutes at 3am in the middle night. They all made it to this place.

Many people share their shelters with their livestock, allowing them to live side-by-side with each other – both humans and animals, one weaker than the other, barely able stand. Saving their livestock is vital.

Firaani Bibi was spotted by me – her wrinkles told her story with all the dignity of her 96 year old years.

She described to me how frightening it was for her family when water entered their home at night.

Her legs were crushed by a wall. She is in extreme pain. Three weeks ago, she sat on a wooden bed in the scorching sun. Relying on the generosity of locals.

Patiently waiting for things to change. She says all she wants to do is go home.

She says, “I just about got by with my life.”

“The water came as a river. The water was so strong that the old woman (referring specifically to herself) nearly got swept away. We almost drowned.”

They have their goat and their rusty walking frames.

She looked deep into my eyes and said to me, “See for yourselves, do we possess anything?” We don’t have anything. There is nothing to drink. I am in pain.

“We are anxious and suffering. We don’t have the money to buy anything. We are just sitting here. We don’t know what to do.

People approach us every time we get out the car, hoping we are doctors or have brought food. Some ask if there is any water in their area.

Arbaab Khatun, a young woman who is confident and tells everyone to do their job, was my first encounter.

We smile. I shake her hand, and introduce myself to her.

With five of her children, she fled her home. Her husband returned to her with the older children. She isn’t sure if they are still alive or dead.

Men walk 20 miles to get food for their families

“No one came here for help”: The massive floods in Pakistan reveal the price of global apathy

She says she would like to show me their current state of affairs because it is just not acceptable.

“Look at that!” “Look at this!” She raises the tarpaulin, which is draped on some posts made of wood to imitate a tent.

“It’s torn. It doesn’t even have a tent. Because the sun is so strong, it has holes all over. I have small children. My youngest child has been extremely ill during this heat.”

Her toddler can use the makeshift cradle. To make a hammock, tie a piece of cloth at each end to the posts.

“This is the place where the little one lies down. The floor is all we have. We don’t have anything. These are my dishes. There is nothing else. There is no food to prepare. Everything’s empty.”

In anger, she throws the pots and pans on the ground. She resents.

Although she doesn’t want to rely solely on handouts, she feels that she deserves more.

They only have the clothes they wore when they fled, and what she has shown me.

They don’t have shoes and her feet are bleeding from her escape.

Her children are bitten by mosquitoes and have swollen, red eyes. Khadija is the youngest and most listless of her children.

“We have nothing. We get up in the morning, then we go to bed again. There is no food, water, or rations. Not even tea. Look!” She points at a terracotta container on two bricks.

They eat some days and they don’t others. She tells me that when the children cry, it breaks my heart. “What other things can we do?” “What else can we do?”

Then she said something that broke mine too.

“We are desperate. My little one has taken to the mud. “We have nothing.”