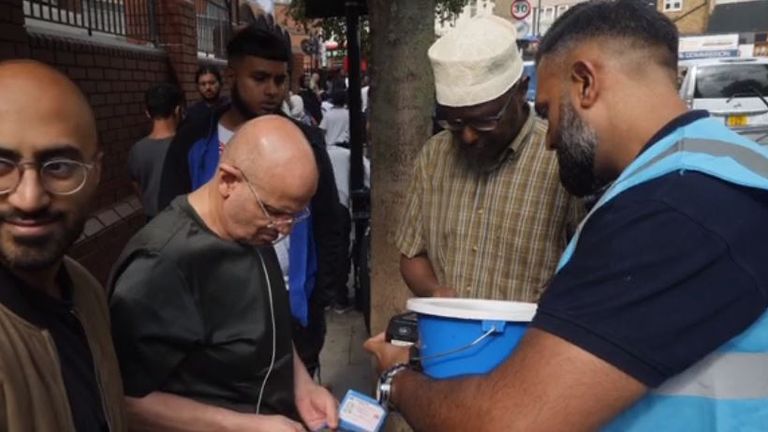 Sky News’ chief executive Saleh Saeed said that the funds were raised in less than two days, and thanks to the hard work of his team.

With the support of the Pakistan government and the United Nations, 11 organizations are working at the DEC.

Behind the scenes, fundraising efforts have been boosted by hard work, creativity, and constant bucket-shaking.

Islamic Relief is the largest charity supported by the DEC. Fundraisers can be found in every mosque.

In less than an hour, more than PS6,000 was raised at Finsbury Park mosque. People are still digging deep despite the current cost of living crisis.

Jamal Abdinasir the imam suggested that empathy, as well as charity, should be the driving force for all Muslims.

He said: “Allah tests different people in different ways. Tomorrow, it could be that we go through a flood or famine, drought, hunger…any difficulty.

“We don’t want that to happen to us.” We can rest assured that our sisters and brothers around the world will help us if that happens.

Pakistan was already in trouble – then came the floods.

More than a third () of the country has been submerged by water from the monsoon rains, and over 1,200 people have lost their lives.

Pakistanis have lost their land, lives, and livelihoods.

The floods had a devastating effect on South Asia and South Asian countries are still dealing with the aftermath.

It is too early to speak of rebuilding.

More rain is on the horizon, but people already have everything.

Fundraisers are trying to make the lives of the affected people a little easier, at least for the time being.

Azizur Rahman (one of the Islamic Relief fundraisers) said to Sky News that his collection will be used to provide emergency assistance to those who are most in need. You can provide food, shelter and hygiene supplies.

“A lot people have lost their homes so we are creating temporary accommodation for them, to give them a safe place to stay.”

It is not surprising that this community has shown so much generosity.

According to a survey of religious groups who donate to charities, Britain’s Muslims were the top givers in 2013.

Young children are the most generous – they spend their pocket money.

Selina Khaider, a young woman who cannot be more than ten, made a simple but powerful comment about the importance of compassion.

“Some of them don’t have food. They are suffering.

We should assist them. It would be very kind.