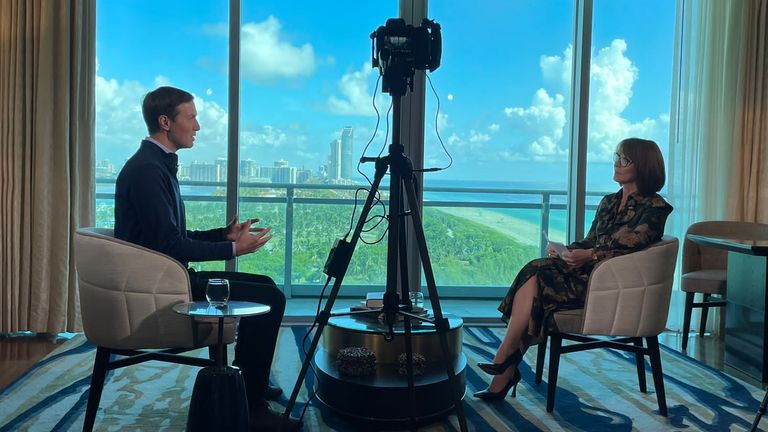 A tall, handsome, preppie New Jersey real estate king, who learned about life’s hard knocks when his father was incarcerated for witness tampering, was speaking to Sky News for a UK exclusive interview to discuss his new memoirs.

He is probably better known on the world stage as the son-in-law of the most controversial US president in modern history.

Mr Kushner married Ivanka Trump in 2009, and they went on to have three children – Arabella, Joseph and Theodore.

Reflecting on their life together, he recalls how Donald Trump spoiled his surprise proposal to Ivanka by advising his daughter that Mr Kushner was about to pop the question.

From early on, Mr Kushner learned Mr Trump struggles to keep a secret, so didn’t share his diagnosis of thyroid cancer while in the West Wing in 2019.

Sitting opposite me this week in a swanky suite in the Miami Beach Ritz-Carlton, I sensed he’s a little vulnerable, perhaps after newspaper speculation he’d had a second round of treatment for the thyroid cancer. He confirmed to Sky News that he had undergone another procedure, but was now recovering well.

Mr Kushner’s face softens whenever he speaks about his wife and their children, one of whom recited poetry, in Mandarin, for the Chinese president during Xi Jinping’s visit to Mar-a-Lago in 2017.

Mr Trump’s Florida home is once again making headlines this month, as FBI agents reveal more about documents they recovered during a raid on the historic palace. It transpired they were top secret, according to agents who needed special clearance to even view them.

Mr Kushner is very sensitive about the subject, and refers to the files merely as “paperwork”. Fiercely loyal to his father-in-law, he is very quick to repeatedly criticise the media coverage on a whole range of subjects, including the Mar-a-Lago raid, the 2020 election result – was it stolen; the January 6th riots – how much danger was the vice president actually in; and also his relationship with the de facto leader of Saudi Arabia.

I countered that the media aren’t always the bad guys. “Sometimes you deserve it,” he says, “and sometimes maybe not.”

However, whenever the subject of his family is raised, Mr Kushner brings the charm.

I wondered if his children realised their granddad had been the leader of the free world? They knew he had a big supply of chocolate in the Oval Office, he reveals.

Mr Kushner also happily shared how much the children love his special recipe for fluffy breakfast pancakes: whip it up pretty good and add chocolate sprinkles.

As we concluded the interview and stepped out on to the balcony, Mr Kushner marvelled at the spectacular coastal view from the suite. He pointed out his downtown office, and gestured to his Miami home, where the family moved following the 2020 election defeat.

“I know that he’s obviously thinking about it,” he replied, adding: “I said (to him) you know, it’s tricky.”

But despite my best efforts, Mr Kushner refused to go further.

My allotted half-hour over, Mr Kushner shook my hand firmly before heading for the door.

The former senior White House adviser is in the middle of a whirlwind round of interviews for mostly right-wing media outlets to promote his memoirs, Breaking History.

• You can see my interview in full on all Sky News platforms.