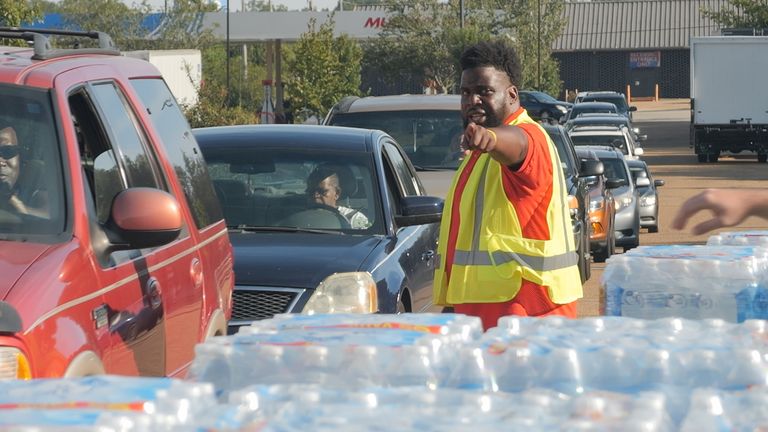 In the car park of Walmart, a long line of vehicles is a stark reflection of America in 2022.

There are faces of frustration inside each car. There is anger and bewilderment too, because here in Jackson, the state capital of Mississippi, they have no safe water.

A ‘boil water’ order has been in place across the city for the past month due to “elevated turbidity levels,” which makes the water appear cloudy. That followed a string of disruptions to the city’s water supply stretching back years, caused by
high lead levels, bacterial contamination and storm damage.

This time, the crisis has been exacerbated by flooding, which damaged the city’s ageing water treatment works.

“It’s a travesty that it’s happening in this day and age,” one man in the queue tells me. “When the infrastructure is outdated, these are the type of problems that we have.”

“We don’t trust the water at all,” another says, adding that she hasn’t trusted the water for years.

Many in this city of 150,000 are collecting for their relatives, young and elderly.

“We’re trying to get water for his mother. She is 87 years old,” a woman says, pointing to her passenger.

I ask if they have any water at home. “It’s coming out, but it’s very slow. And you can’t use it for anything. We’re told to boil it for three minutes.”

Guidance issued by the American Red Cross suggests people should use coffee filters to remove grit from the water before boiling it, such is the state of things.

Beyond the immediate challenges of how to wash, flush the toilet, find water to drink, they blame either the city mayor or the state governor.

“The governor is to blame for it,” one man says. “He won’t get the funds to Jackson to help.”

Flood waters from the Pearl River, have also crippled the water system this past fortnight, but this isn’t simply a story of storm damage. It’s about funding, politics and race.

In Jackson, 82% of people are black, a quarter live in poverty – 25% for a country where the average poverty level is 11%. Crime levels are among the highest in the country.

Jackson is a city that feels neglected and forgotten, like so many corners of today’s America.

President Joe Biden has made tackling the nation’s crumbling infrastructure a central policy issue ahead of November’s midterm elections.

He has pledged federal support for the immediate challenges. Fixing a legacy of underinvestment will take many years.

At a news conference across town, a show of political unity masked a tricky relationship between city mayor and state governor.

Mayor Chokwe Antar Lumumba, a Democrat, has been asking for more funding for Jackson from the state’s Republican governor, Tate Reeves, for years.

I asked Mr Reeves why the city is in this extraordinary situation.

“Well, what I would tell you is, and I know that you in the press really want to play the blame game, and you really want to focus on pitting different people against one another, and that’s certainly your priority, and that’s fine.

“What we are focused on is the immediate health and welfare of Jackson residents.”

Governor Reeves continued: “There’ll be plenty of time in the future to play the blame game. And you can do all that, you can do it in real time if you want to, but I ain’t got time for it.”

The city mayor, Chokwe Antar Lumumba, who some also blame for the crisis, was more forthcoming.

“This is a set of accumulated problems based on deferred maintenance that’s not taken place over decades,” he said.

He estimated it would cost at least $1bn (£870m) to fix the water distribution system. Billions more would be needed to resolve the wider neglect.

“The residents of Jackson are worthy of a dependable system, and we look forward to a coalition of the willing who will join us in the fight to improve this system that’s been failing for decades,” Mayor Lumumba said.

The stark reality is that the authorities here have no idea when safe water will return to this American community.