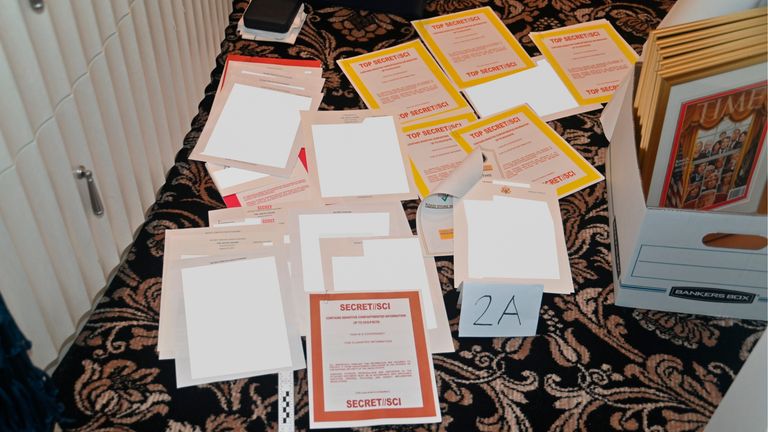 According to the US Justice Department, FBI agents discovered empty folders with classified banners when they searched Donald Trump’s Mar-a-Lago residence last month.

These details were made available in the department’s more detailed inventory.

It describes the 33 boxes that were taken from the Florida home of the former president during the search conducted on August 8.

It also shows how newspapers, magazines, and other items were mixed with documents that investigators claim were classified or top secret.

According to the Justice Department, there is no secure space at Mar-a-Lago that can protect such sensitive government secrets.

It is conducting a criminal investigation to determine if he illegally retained national defense information and attempted to obstruct it.

The inventory shows that 43 folders with classified banners were removed from a container or box at the office along with 28 folders labeled “return to secretary” or “military aide”.

These empty folders were also found inside a storage cupboard.

The inventory does not indicate why any folders were empty, or what may have happened to documents within them.


What was taken from Mar-a-Lago

These are the documents that the FBI seized from Mar-a-Lago, according to the inventory

* 15 documents from the US government with SECRET classification markings

* 69 US government documents/photographs without classification markings

This is after Mr Trump’s lawyers attempted to downplay his discovery of highly-classified documents at his Florida home.

A court filing showed an image of top secret documents that were discovered during the search. Some of these documents are marked as “top secret//sci”.

In a filing to court, Mr Trump’s lawyers stated that the idea that presidential records could contain sensitive information shouldn’t have been alarming.

They also attacked Justice Department for conducting the search and claimed Mr Trump was involved with a “give-and take” with US National Archives regarding the return of presidential records at the same time that was “standard”.

According to the filing, Mr Trump also allowed FBI agents “to come to his house and give security advice.”