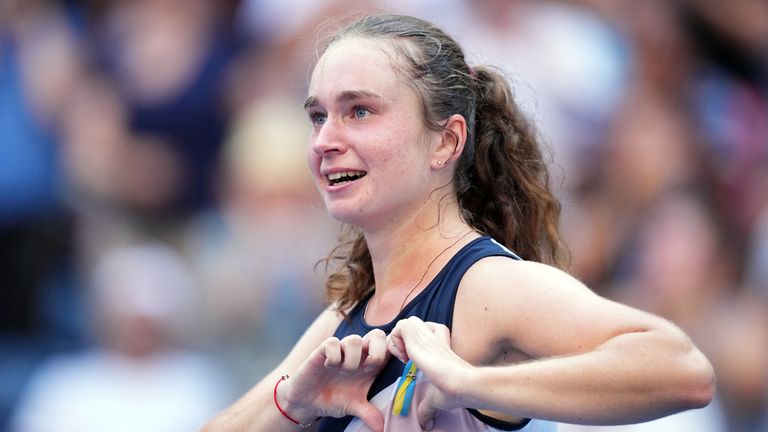 A young Ukrainian tennis player whose training base was bombed has caused the first big shock of the US Open by winning her match against the competition’s seventh seed.

Daria Snigur defeated Romania’s Simona Halep 6-2 0-6 6-4 in what was by far the biggest result of her senior career so far.

Breaking down in tears, the 20-year-old from Kyiv made a heart shape with her hands around a ribbon in the colours of the Ukrainian flag after her win.

“It means Ukraine is always in my heart,” she said. “This is a victory for Ukraine, for all Ukrainian people, for my family, for my team.”

The 40-year-old announced earlier this month that this tournament would very likely be her last, bringing an end to a 27-year career that has seen her transcend tennis.

Addressing the crowd, Williams said: “First of all, thanks, I didn’t expect any of this. When I step out onto the court, I just want to do the best I can. The crowd was crazy. They really helped pull me through.”

Snigur used her victory speech to talk about the war with Russia in her home country, where her mother has remained.

The youngster has been unable to practice for the competition at her usual training camp since a bomb destroyed it.

“The situation is bad, of course,” she said. “I try to do the best for Ukraine, I try to support my country.

“It’s not so easy because the war is continuing. Sometimes it’s impossible to play, but I try to do my best because I want to live in Ukraine.

“I think (Ukrainian) people enjoyed my match because I have many messages. I didn’t understand what happened. I will try to understand it tomorrow because it was I think it was the best match in my career.”

Other results from the US Open

Coco Gauff eased into the second round with a 6-2 6-3 victory over Leolia Jeanjean.

Halep aside, it was generally a good day for the fancied names, with third seed Maria Sakkari gaining revenge for her Wimbledon defeat by Tatjana Maria with a 6-4 3-6 6-0 victory.