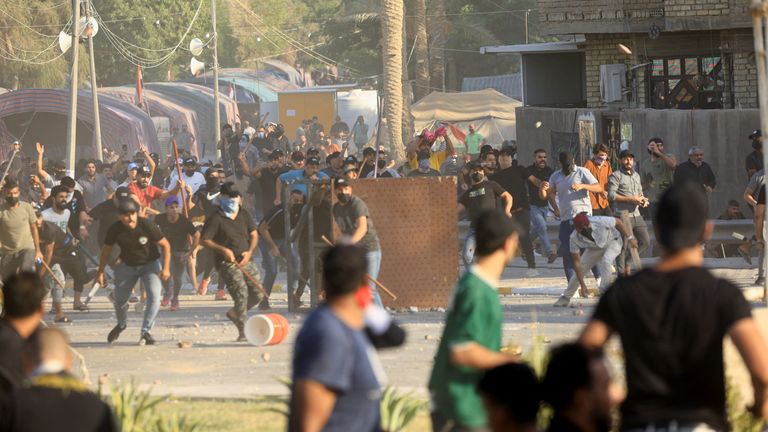 After protestors stormed the government palace in protest against the resignation of an influential Shiite cleric, at least 15 people were killed in Iraq.

After Muqtada al-Sadr declared he was quitting Iraqi politics, hundreds of people gathered around the building in Baghdad. They also ordered the closing of his party offices.

Medical officials stated that several demonstrators were shot and 12 more were hurt by tear gas and other physical altercations with police.

Responding to the unrest, a national curfew was declared at 7 p.m. and the caretaker premier suspended all cabinet sessions.

According to a statement, the military urged the supporters of the cleric to immediately leave the heavily fortified government area “to prevent clashes and the spilling blood of Iraqi people”.

The government of Iraq has been in lockdown since October’s parliamentary elections, when Mr al-Sadr’s party won a large share of the seats. However, it is not enough to form a majority government.

The country ended up in political chaos after Mr. al-Sadr refused to negotiate with Iran-backed Shiite rivals.

Al-Sadr’s rhetoric has been framed with a nationalist agenda and reform agenda to further his political goals. This resonates strongly among his large grassroots base who hail from the poorest sector of Iraqi society and have historically been excluded from the political system.

They call for the dissolution and early election without participation by Iran-backed groups. These groups are responsible for maintaining the status quo.

His resignation appears to have been in response to the retirement Shiite spiritual leader Ayatollah Kdhim al-Haeri. Many of his supporters follow him.

Hundreds of protestors climbed down the cement barriers at the government palace and broke its defenses. Many of them ran into the marbled halls of the building during Monday’s demonstrations.

Photographs showed many protesters swimming in the palace pool. Some held up pictures of Mr al-Sadr.

Iran regards intra-Shiite discord as a threat to their influence in Iraq. It has tried repeatedly to broker dialogue with Mr al-Sadr.

His supporters broke into the Iraqi Parliament in July to stop his rivals from the Co-ordination Framework (an alliance of mostly Iran-aligned Shiite party parties) from forming a government.

hundreds have been protesting the building for more than four weeks. Mr al-Sadr has resigned.

The Framework is headed by Nouri al-Maliki, a former prime minister.


This is not the first time that Mr. al-Sadr has resigned

It is not the first time that Mr. al-Sadr has declared his retirement from politics. Many have dismissed this latest move as another ploy to gain more leverage against his rivals.

Many were concerned about the impact on Iraq’s fragile political environment. However, Mr. Al-Sadr’s decision gives his followers the freedom to act as they see fit.

Al-Sadr has a large grassroots following and has great influence over the government institutions of Iraq through the appointment of civil servants.

Continue reading: Protest over the nomination of PM in Iraq

His Iran-backed rivals also have militias.

The UN mission in Iraq called the protests an “extremely dangerous escalated” and asked that demonstrators vacate all government buildings in order to allow the caretaker government continue to run the state.

It encouraged everyone to be peaceful and to “refrain” from any acts that could cause an unstoppable chain reaction.

The statement stated that “the very survival of the State is at risk.”