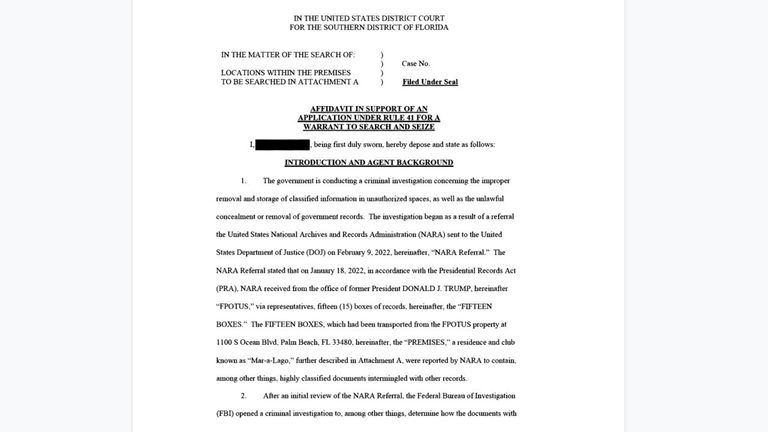 The FBI’s justification for its raid on the home of former US president Donald Trump has been released.

However, a judge has ordered it to be heavily redacted and large parts of the document are blacked out.

Here is the significance of the parts we can see and an explanation of why some extracts have been blacked out:

In this first page, there is just one redaction. It’s the name of the FBI agent who wrote the affidavit – the 32-page justification to a judge for the proposed raid on Mr Trump’s Florida home.

The rest of the first page provides confirmation and detail on a government investigation – criminal in nature – concerning “the improper removal and storage of classified information in unauthorized spaces as well as he unlawful concealment or removal of government records”.

As the document later alleges, these documents were of a highly classified nature and put the identity of US spies at risk of exposure.

Within the first page we also get confirmation that the FBI investigation was sparked by a referral by NARA – the United States National Archives and Records Administration – after it received 15 boxes of documents from Mr Trump’s team in January.

This is key. More will be revealed below.

Page one also mentions Mr Trump by name but does not say he is the specific target of the investigation. It says he will be referred to as FPOTUS in the document. This is an acronym for Former President Of The United States.

Here we get more detail on the 15 boxes mentioned on page one. These boxes are central to the investigation.

They were handed over by Mr Trump’s team in January after months of requests by the National Archives.

National Archive staff noticed they were classified and referred the case to the FBI. Their job was to conduct a formal inquiry into whether the documents were stored improperly and why they ended up in Mar-a-Lago.

The affidavit states that “there is probable cause to believe that additional documents that contain classified NDI or that are Presidential records subject to record retention requirements currently remain at the premises” (Mar-a-Lago).

We don’t know what led the FBI to believe more documents were at Mar-a-Lago, but a separate document released alongside the affidavit says that numerous witnesses have been helping investigators.

The affidavit reveals that the FBI believes there is “probable cause to believe that evidence of obstruction will be found” at Mar-a-Lago.

Point four of page two reveals details of the FBI investigator who wrote the affidavit – he is a “counterintelligence and espionage” expert.

Page three states clearly that it’s the view of the FBI that “there is probable cause to believe that the locations to be searched at the premises contain evidence, contraband, fruits of crime, or other items illegally possessed in violation of…”

It then cites a specific code of the United States law – Title 18, point 793 which relates to “gathering, transmitting or losing defence information”.

Interestingly, the document does not allege a crime against any individual, at least in the parts we are able to see.

The fourth page is useful in deciphering US government jargon and acronyms which are key to understanding the classification of the documents found at Mar-a-Lago.

It differentiates “secret” from “top secret”, it defines SCI – Sensitive Compartmented Information, Special Intelligence, and HUMINT – that is a designation for a report by a CIA officer based on conversations with a confidential human source overseas – a spy.

A central concern of the FBI seems to be that spies were put at risk because the documents were not stored correctly.

Many of the pages look like this – totally redacted. This, we’re told, is in part because the identity of witnesses could be revealed. Remember the inquiry is ongoing. Investigators don’t want to jeopardise it.

A separate document – a Memorandum of Law – explaining the need for redactions to the affidavit, says “revealing this information could severely disadvantage the government as it seeks further information from witnesses… These concerns are particularly compelling in this case… In short the government has well founded concerns that steps may be taken to frustrate or otherwise interfere with this investigation if facts in the affidavit were prematurely disclosed”.

This is a key page. It refers to the 15 boxes handed over by Mr Trump’s team back in January 2022, a year after he left the White House.

We learn that within the boxes were hundreds of documents including some with the highest US government classifications.

It also states that some of the documents contained notes handwritten by Mr Trump (FPOTUS).

It was the discovery and examination of these documents, combined with witness information, which prompted the FBI to carry out the unprecedented raid on a former president’s private home on 8 August.

It’s worth stressing that although Mar-a-Lago does include the private home of Mr Trump it is also a golf club, venue and resort. To see it as being a secluded private home would be well wide of the mark.

Mr Trump did an interview with the Lou Dobbs show The Great America on Friday. It’s not clear when it was recorded but appears to have been before the release of the affidavit.

In the interview, he says: “I did nothing wrong. And it’s the same thing here. We were essentially attacked. We were broken into. They opened up safes, they brought safe crackers in. And they brought many, many FBI agents in all right before the midterms and all when I have the best poll numbers I’ve ever had.