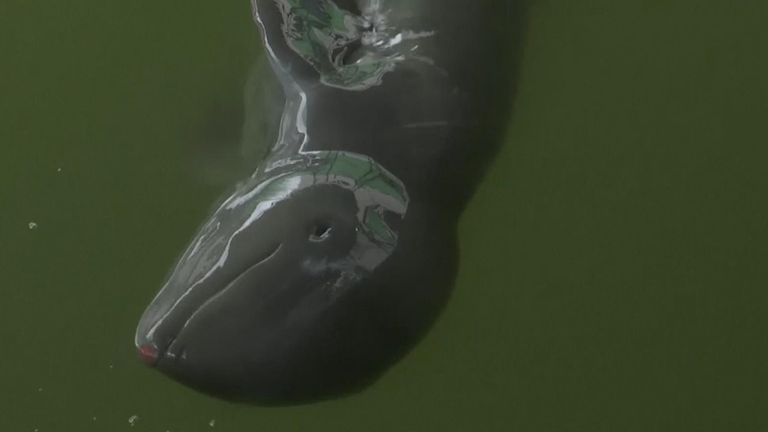 An injured baby dolphin found drowning in a rock pool off the eastern coast of Thailand is starting to get better, volunteers who are caring for him have said.

The young Irrawaddy dolphin has been named Paradon, which roughly translates as “brotherly burden”.

Irrawaddy dolphins are dark grey with a characteristic short beak and bulging forehead.

The dolphins are found in shallow coastal waters of south and Southeast Asia, and three rivers in Myanmar, Cambodia and Indonesia.

They are being threatened by loss of habitat, pollution and illegal fishing, and are considered a vulnerable species.

Paradon requires round-the-clock care and is being treated by a dozen vets and volunteers at the Marine and Coastal Resources Research and Development Centre in Rayong, Thailand.

One vet who is caring for him said: “Normally, dolphins found stranded on the shore are usually in such a terrible condition. The chance that these dolphins would survive are normally very, very slim. But we gave our best to him on that day.”

Fishermen found the baby dolphin stranded on shore on 23 July. He was suffering from an infection and was so weak he could not swim.

He was put in a pool filled with seawater and given medical treatment, with volunteers taking turns to hold him in water so he wouldn’t drown.

A volunteer at the centre said: “He does not eat enough but rather just wants to play. I am worried that he does not receive enough nutrition. When you invest your time, physical, mental attention and money to come here to be the volunteer, of course, you wish that he would grow strong and survive.”

Paradon can now swim but remains weak and is still in a critical condition.

He is also not drinking enough milk even though the team tries to feed him every 20 minutes.

Volunteers say it’s hard not to grow attached to the little calf, with his round baby face and curved mouth.

Sumana Kajonwattanakul, director of the centre, says the baby will need long-term care.

It could take up to a year to wean him off milk and teach him to hunt for his own food.

She said: “If we release him once he gets a better, the problem is he won’t be able to have milk. We will have to take care of him until he has his teeth, then we must train him to eat fish, and be part of a pod. This will take quite some time.”

The team hope that caring for Paradon will help them learn more about his species’ recovery process.

A volunteer said: “If we can save him and he survives, we will learn so much from this. Secondly, I think by saving him, giving him a chance to live, we also raise awareness about the conservation of this animal as they are rare and not many of them left.”

Officials from the centre believe there are only around 400 Irrawaddy dolphin left on the eastern coast of Thailand.