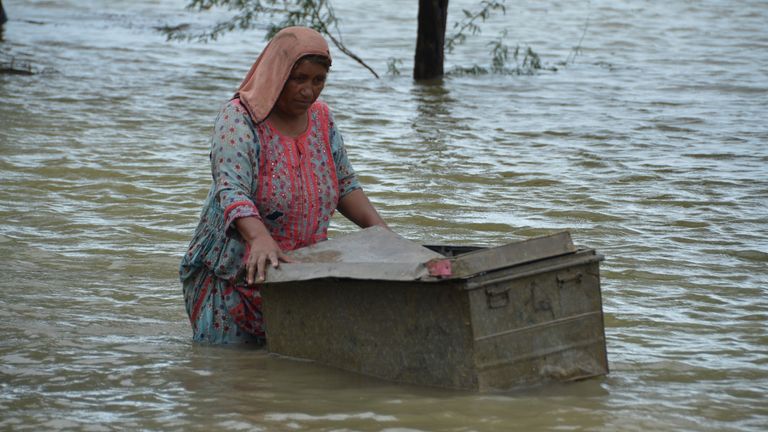 Pakistan seeks international assistance to assist with the “humanitarian catastrophe of epic proportions”, as nearly 1,000 people died from flooding in Pakistan.

It occurs amid torrential rains that have been pounding the country since June.

He tweeted: “The continuing rain spell has caused destruction across the country,” and thanked other countries for their support.

“Together, we will make it better.”

More than three million people have been affected by flooding caused by rains, melting glaciers, and cloudbursts.

According to the National Disaster Management Authority, more than 170,000 homes were damaged and roads and bridges were destroyed.

Despite floodwater receding in some areas, the situation has worsened for Sindh province where rescue workers used boats to evacuate marooned residents.

Flood-affected residents are still living in tents and makeshift homes.

The United Nations announced Thursday that it had allocated PS2.5 million to UN agencies and partners in Pakistan for flood response.

It stated that the funds would be used to provide health, nutrition and food security in flood-affected regions, with a particular focus on the most vulnerable.

The monsoon rains of Pakistan usually begin in July.

However, this year heavy downpours began to batter the country in June, which triggered floods.

Sherry Rehman, climate change minister, stated that this is a humanitarian catastrophe of epic proportions. Thousands are without shelter, many without food, and people are stranded.

“We must ask not only the provinces and Islamabad. It is beyond the capabilities of any single administration or government to rehabilitate, even manage the rescue-and-relief.”