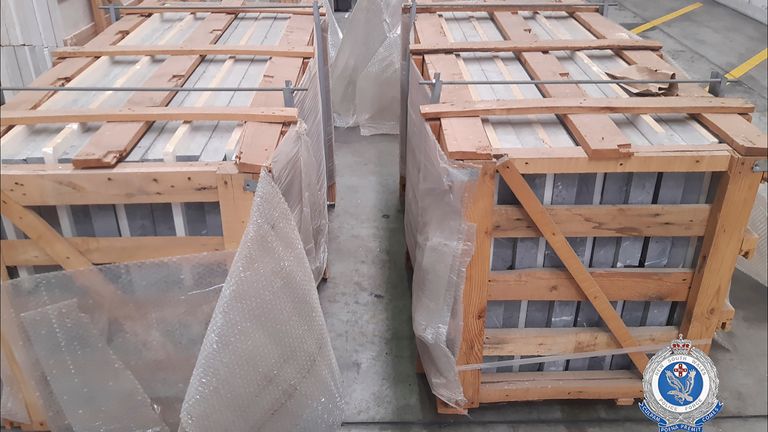 The authorities in Australia have seized 1.8 tonnes of methamphetamine in the country’s biggest-ever bust of the illegal drug.

Hidden in marble tiles shipped from the Middle East to Sydney, the drugs have been valued at AU$1.6bn (£944.2m) by police.

Three men were arrested after the meth was discovered in 24 containers at Port Botany earlier this month.

Last week, another 1,060kg (2,337lbs) of the drug were found in 19 containers at the same port, hidden in the same way and shipped from the United Arab Emirates.

“This seizure will be felt for weeks to come by many high, mid and lower-level suppliers,” he said.

“I think that the amount of harm that has been reduced here is significant. This seizure is the biggest in Australia’s history, so what we are seeing now is the syndicate that was operating locally on our shores, they had international connections, so we are looking well into that.”

No further arrests have been made since the seizure last week, and investigators have now turned their attention to identifying the overseas suppliers.

“The Middle Eastern region is probably our main focus, but I certainly wouldn’t restrict our investigation to just that region either,” Chief Supt Watson added.

The three men already arrested – aged 24, 26 and 34 – face potential life sentences in prison if they are found guilty of drug trafficking.

More from Sky News:
Drug users could have passports confiscated
Most prisoners who need drug treatment do not get it
Heroin: Dying in silence – podcast

All of them have appeared in court and have been refused bail.

Australia’s previous record meth haul was 1.6 tonnes, which was found hidden in speakers and shipped into Melbourne from Bangkok in April 2019.