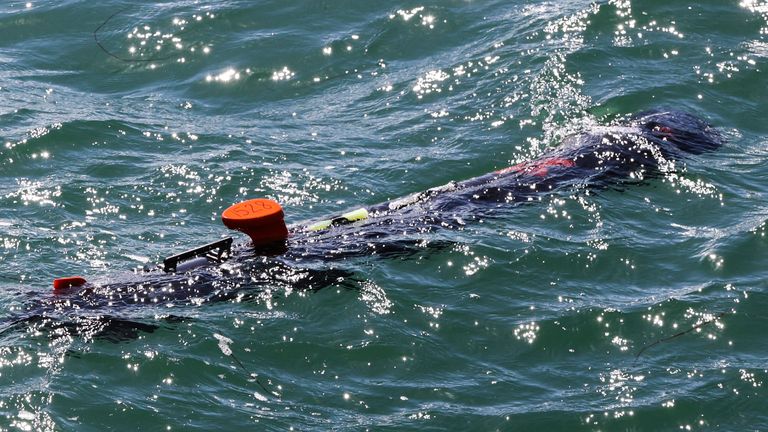 Royal Navy is training Ukrainian sailors to use underwater minehunter drones. This will help clear the coastline.

A course in south England has been started by more than a dozen Ukrainian workers. They will learn how to operate the vessels and analyze data.

The Ukrainian navy will use the drones to scan the seabed using sonar technology.

Sky News was told by a sailor that drones would be “very useful for us to clear sea area, especially in a very crucial region, near Odesa”.

He said, “Our primary mission it to detect these mines, because it’s important not only for military purposes, but also for civilian ships for civilian trade.”

The situation is such that fully demining the coast could take over a decade. However, for now, the focus remains on returning to Ukraine and equipping ourselves with the necessary skills to “immediately” operate the drones.

He said, “The whole nation is like one fist. We are strong.”

Learn more about the Royal Navy

This program is expected to play a key role in moving grain-carrying ships out of the country.

After Russia lifted its naval blockade, exports from Black Sea ports began to resume at the beginning of August. This blockade had severe consequences for the supply and price worldwide of grain.

Exports are slowing down and may be hampered by seamines.

They should be able quickly to clear the main route from their ports.

“This is important because there is enormous pressure, global pressure to actually shift what one might call a grain mountain.

It’s not just grains, it’s vegetable oil and maize. It is affecting the starvation levels of large areas of the world that are on the verge of starvation.

“This stuff must be moved.”

The UK and the US will each gift Ukraine six autonomous minehunting drones.

Training is provided by the Royal Navy’s Diving and Threat Experimentation Group and the US Navy 6th Fleet.

Sean Heaton, Commanding officer of the Royal Navy Diving and Threat Exploitation Group told Sky News that the most important thing at the moment is for commercial vessels to be able get in and out.

“It is therefore vital for the Ukrainian Navy that they can search the seabed on their own and find out where the threats are.”

He says that despite the fact that training was organized at short notice, the sailors were incredibly motivated to learn.

“Their enthusiasm, their energy levels to learn and understand these capabilities is truly amazing.

“They know that this capability will allow them to go home and so they are motivated to work with us, and it is a real honor to have the chance to work with them.”

“This crucial equipment and training will enable Ukraine to make their waters safer, smoothing the flow of grain to other parts of the world, and supporting the Armed Forces of Ukraine in their efforts to defend their ports and coastline.”