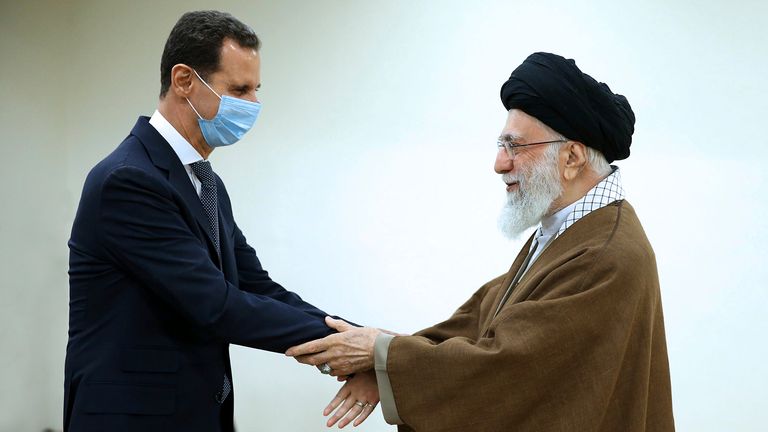 After rockets were fired on western coalition bases located in the northeast, three American soldiers sustained injuries in Syria.

According to the statement of the US military’s Central Command, a series of rockets struck two bases used by American troops to “support” the ongoing mission against the remnants of the so called Islamic State caliphate.

Three soldiers are believed to have sustained minor injuries.

This incident occurs 24 hours after an American airstrike on Iranian-backed armed group in the country.

It demonstrates the complex and persistent security situation in Syria, involving the competing interests the Americans, Russians, Iranians, Turks, Syrian government troops and other elements of the Islamic State terror organization (IS).

According to reports, the United States has approximately 900 troops spread between two bases in northeastern Syria that are controlled by Kurdish forces.

Trump, the former president, stated in 2020 that he would withdraw all American troops from Syria. This led to accusations of abandonment of Kurds.

In fact, the American mission to defeat IS in the Middle East and control its oil fields was carried out through Trump’s presidency. It was maintained by President Joe Biden.

After more than a decade civil war, much of Syria is now in the control of Bashar al-Assad, the president of the country.

Iran-backed militias have assisted the leader of Syria to retake and retain land that was taken by opposition groups since 2011.

The country’s northeastern Rojava remains under pro-western Kurdish rule, while IS elements remain in remote areas near the border with Iraq.

Washington officials have repeatedly accused Iranian-backed proxy organizations of attacking US troops in Syria and Iraq.

Colin Kahl (under secretary of defense for policy) spoke at a Washington news conference on Wednesday. He said that he would not hesitate to defend himself.

“We won’t tolerate any attacks by Iran-backed troops on our forces anywhere in this world, including in Syria. We will not hesitate to defend ourselves and take additional steps as necessary.”

He spoke before the latest rocket attack, and was responding to a series US airstrikes against nine bunkers that were claimed by the Americans to be ammunition depots or logistic supply facilities.

To give a hint at the complicated geo-politics, American officials confirmed that they had spoken to the Russian military prior to carrying out airstrikes using “deconfliction” lines.

Russia has a substantial military presence in Syria, including a naval station in Tartus. This has helped President Assad regain control.

Over the past week, the US and Iranian proxy strikes have escalated. This comes at a moment when American and European diplomats are ready to revive a deal to stop Iran from developing nuclear weapons.

The Biden administration tried to revive it by relying on its ability to trust nuclear inspections. A new deal is expected to be in place, much to the dismay of Israel and other Gulf Arab countries who believe Iran cannot be trusted.

Signatories to the 2015 original deal, including President Obama’s United States, insist on seperating the Iran enrichment program from Iran’s behavior regionally. This was heavily criticised both by Israel and the gulf Arab countries.

This week, President Biden used his military’s airstrikes to show that he wants to work with Iran and will not hesitate to use force against Iranian interests.