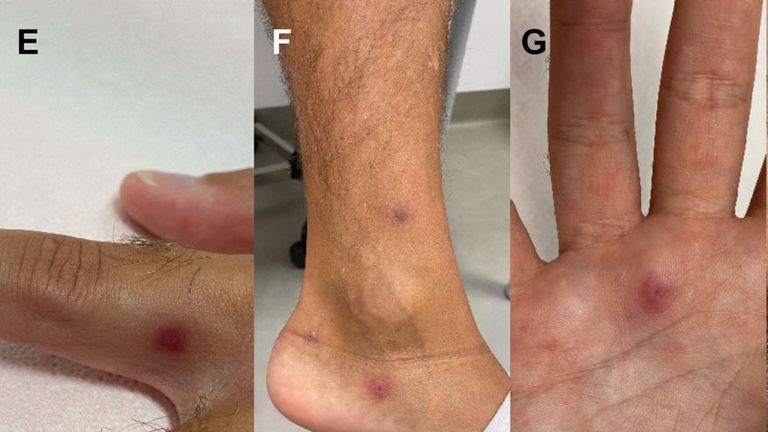 After a case in Italy, health authorities were warned to be on the lookout for monkeypox in patients.

This is the result of a 36-year old man seeking treatment after experiencing symptoms after a trip from Sicily to Madrid.

To begin with, he had a fever, headache and fatigue. However, he also had large spots that began bulging.

According to a research paper in the Journal of Infection, tests on the man revealed that he wasn’t just suffering from the coronavirus but also had monkeypox.

Further tests revealed that he was HIV-positive, making him the first person to contract the virus.

According to the study’s authors, monkeypox and COVID have “the same symptoms as fever, lymphadenopathy headache, sore throat, fatigue and headache”. However, it is “difficult for doctors to diagnose correctly, especially considering that not all monkeypox patients develop skin lesions, and that COVID-19 may present with rash or vesicles (spots).

The doctors stated that while it’s too soon to know if the virus combination will cause a worse outcome, they should be aware of the possibility that this could occur as there is not a widely available treatment for the co-occurring viruses.

According to the authors, the paper stated that “as this is the only case of monkeypox virus and SARS-CoV-2 co-infection, there is not enough evidence to support that this combination could aggravate patient’s conditions.”

“Given the current SARS/CoV-2 pandemic, and the increasing number of cases of monkeypox, healthcare systems need to be aware of the possibility, and promote appropriate diagnostic tests in high risk subjects. These are essential for containment, as there is not widely available treatment or prophylaxis.

He was twice vaccinated against COVID and spent five days in Spain, 16-20 June 2022. Nine days later, he came down with a fever of 39C.

He tested positive for COVID on 2 July. Later that day, a rash began to form on his left arm. It turned into small, tender spots, surrounded by red ringing around his body, lower limbs and face.

He continued to have swellings and he visited the Policlinico G. Rodolico – San Marco University Hospital in Catania, Italy three days later. There, he was transferred into the infectious diseases unit.

Doctors told him that he was being treated for syphilis in 2019, and that he had done an HIV test in 2021 with a negative result.

They decided to run a series of tests because of his symptoms. Monkeypox was identified as being from the West African Clade. This variant is responsible for the Spanish epidemic. The COVID variants were BA.5.1, which is one of the main causes of infections in the world.

Nearly all of the skin lesions became crusty and eventually turned to scars by the third day. He received HIV treatment and was eventually discharged.

According to doctors, the case of the patient in question highlights the importance of reviewing the medical history to determine if a diagnosis can be made. A failure to do so could result in others being put at risk.

Santi Nolasco led the authors who stated that the man reported having unprotected sexual relations with men while he was in Spain.

They stated that monkeypox symptoms and COVID-19 symptoms can overlap. This case also corroborates the fact that in order to diagnose co-infections, it is crucial to collect patient history and observe sexual behavior.

“Our case highlights that sexual intercourse could be the main route of transmission. After a diagnosis for monkeypox, STI screening should be performed.

“In reality, our patient was positive for HIV-1. Given his CD4 count, it is possible to assume that the infection was recent.

“Note: The monkeypox oral swab test was positive even after 20 days. This suggests that the individuals could still be contagious several days after clinical remission. Physicians should be aware of the danger and encourage patients to take precautions.

According to the paper, monkeypox has affected more than 16,000 people in 74 countries since January 2022. The COVID subvariants BA.4 (or BA.5) are responsible for over a million cases each day.