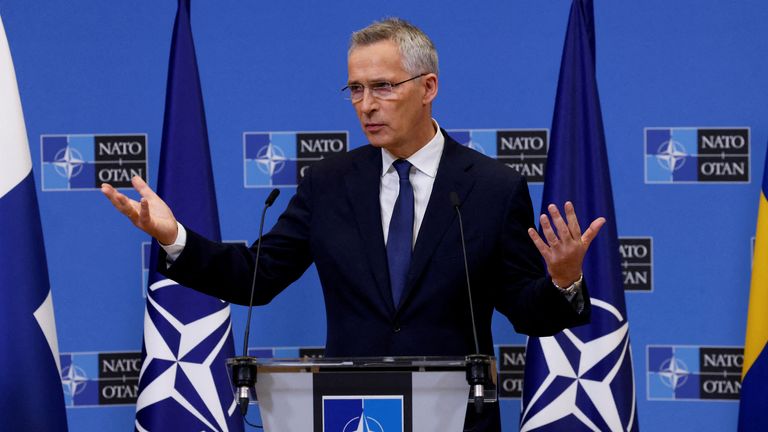 NATO countries need to spend more on defence as “we live in a more dangerous world” and the alliance continues to support Ukraine against the “brutal aggression of Russia”, the organisation’s head has told Sky News.

Member nations have been sending weapons, ammunition, and many types of light and heavy military equipment to Ukraine, including anti-tank and anti-air systems, howitzers and drones, as the Kyiv government battles President Vladimir Putin‘s forces.

Secretary-general Jens Stoltenberg told presenter Kay Burley that his organisation is helping Ukraine “uphold the right to self-defence” and is preventing the war from escalating beyond the country.

He stressed NATO and allies were “not part of the conflict” – but the alliance has increased its military presence, especially on the eastern flank, to send a “very clear message” to Moscow that if any NATO ally is attacked, the whole alliance will respond.

“The UK is playing an important part in those efforts,” he added.

Mr Stoltenberg said “the brutal reality is that faced with Russia‘s military build-up, the will to use force against neighbours, there is a need to invest more in defence”.

He said the defence spending guideline for NATO members is 2% of gross domestic product (GDP), and the UK is spending more than that figure, along with “more allies”.

However, he stated: “We need to spend more on defence. I have been a politician myself for many, many years. And I know that, of course, it’s always more tempting to spend on healthcare, on education, on infrastructure, instead of spending on defence.

“But when we live in a more dangerous world, when we see the aggressive actions of President Putin against a sovereign, peaceful nation in Europe – Ukraine – and all the threatening rhetoric against NATO allies, then we need to invest more.

“And that’s exactly what NATO allies are doing.”

The former Norwegian prime minister said NATO needs to invest in new and more modern capabilities to “ensure that we are able to also protect all allies in the future”.

“The good news is that more allies actually spend 2% or more on defence, and those who are not yet at 2% have, most of them, clear plans in place to reach 2%.”

He went on to say that “2% is a minimum. So of course we welcome the UK and others, which are aiming at a higher level of spending than 2%”.

Conservative leadership frontrunner Liz Truss has said if she becomes the UK’s next prime minister she would raise defence spending to 3% of GDP by 2030.

Her rival in the race for Number 10, Rishi Sunak, views the NATO target of 2% as a “floor and not a ceiling” and notes it is set to rise to 2.5% “over time” – but refuses to set “arbitrary targets”.

Read more: What have Sunak and Truss pledged for the country? 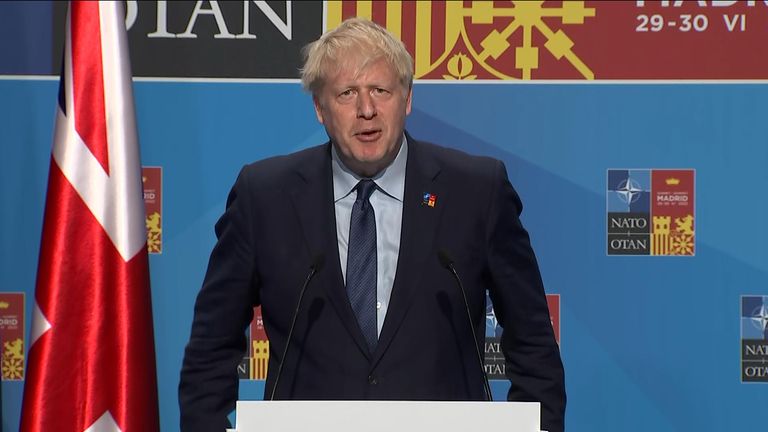 Finland and Sweden, which had neutral status for decades, have in recent months applied to join NATO.

Mr Stoltenberg said: “Having Finland and Sweden in NATO will strengthen NATO. They have advanced militaries, they have very capable armed forces.

Russia and Ukraine have blamed each other for strikes on the Zaporizhzhia plant, which was captured by Russian forces in March.

The UN nuclear watchdog, the International Atomic Energy Agency, will visit the site in days if talks to gain access succeed. It said Ukraine had informed the IAEA that shelling had damaged plant infrastructure including laboratory and chemical facilities.

And there are fears of a nuclear catastrophe at the power station where a plume of radiation could be released, potentially westwards to NATO countries.

Mr Stoltenberg said the situation there was “dangerous” and he called for Russian troops to leave the plant.

He said: “It’s reckless of Russia to deploy forces to use the area around the nuclear power plant as a launching pad for artillery, for attacks on Ukrainian forces.

“So therefore, we need the International Atomic Energy Agency to have access to be able to inspect the site. We need the Russians to move their forces away from the nuclear power plant, and we need the Ukrainian operators to be able to do their work in a peaceful and controlled environment.

“Because what Russia does around the power plant is dangerous. And it’s dangerous for not only Ukraine, but also for the whole of Europe.”