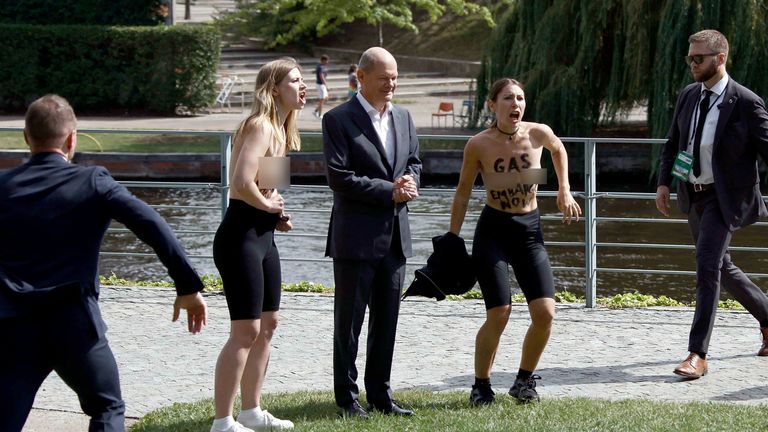 Before his security team arrived, the protesters marched to the podium with a slogan on them that read “GAS EMBARGO Now”.

Mr. Scholz spoke at the Federal Government Open Day at the Chancellery on Sunday.

This comes after a survey revealed that around two-thirds of Germans were unhappy with their leader and his fractured coalition. The coalition has been in crisis after crisis ever since December, when he was elected.

According to Insa’s Bild am Sonntag weekly newspaper, only 25% of Germans think the Social Democrat does his job well. This is down from 46% in March.

However, the record-breaking 62 percent of Germans believe that Mr Scholz, who was deputy to Angela Merkel’s conservative leader in the previous coalition, is not doing his job well. This compares with 39% in March.

Since he took power, he had to deal with war in Ukraine, energy crises, drought, and soaring inflation – all of which have pushed Europe’s largest economy into recession.

Critics accuse him of not being a leader enough.

Russia will suspend natural gas supplies to Europe for three consecutive days at the beginning of the month via its main pipeline.

The announcement by the state energy giant was made Friday, putting pressure on the region in its quest to refuel before winter.

Unscheduled maintenance of the Nord Stream 1 pipeline that runs under the Baltic Sea to Germany deepens the energy standoff between Moscow, Brussels.