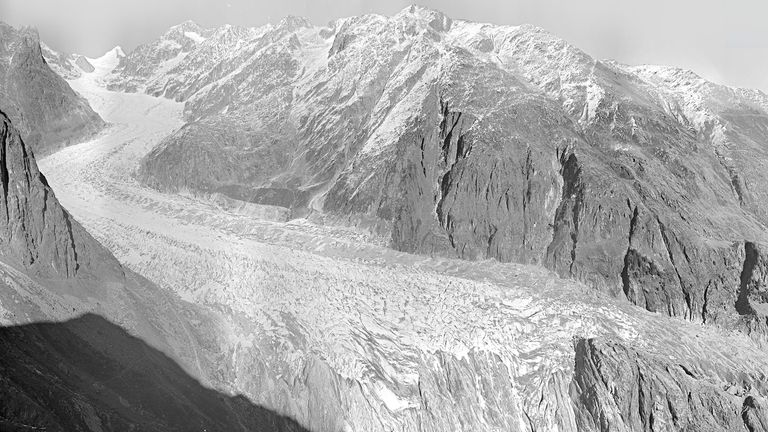 The 1,400 Swiss glaciers have lost half their volume in less than 100 years. A study also found that the retreat of ice has been accelerating.

According to researchers at ETH Zurich and Swiss Federal Institute of Forest, Snow and Landscape Research, the ice volumes have shrunk by half in the 85 years between 1931 and 2016.

They have also lost an additional 12 percent since 2016.

Daniel Farinotti, co-author of the study that was published in The Cryosphere (a scientific journal), stated, “Glacier retreat has accelerated.”

“Close observation of this phenomenon and its historical dimensions are important, as it allows us infer glaciers’ responses to changing climate.”

The area of Switzerland’s glaciers is approximately half that of the Alps.

The 20th century’s first reconstruction of Swiss ice loss was based partly on analysis of changes in the topography of the glaciers since 1931. The teams used long-term observations, field measurements, and aerial photographs to combine the data.

These photos included 22,000 photographs taken at the summits between the two world Wars.

Researchers could use multiple sources to fill in the gaps. Only a few glaciers in Switzerland have been regularly studied over the years.

The researchers used decades-old techniques to compare the shape and location of images of terrain, as well as the use of cameras to measure angles.

The teams compared the surface topography of glaciers at different times, which allowed for calculations about the evolution of ice volumes.

Researchers discovered that not all glaciers are losing ice at the exact same rate.

The speed of retreat was affected by altitude, debris levels and the flatness or the “snout” of glaciers – the lowest part of the glacier that is most susceptible to melting.

They also discovered that there was sporadic growth of glacier mass in two periods: the 1920s and the 1980s. However, this was outweighed by the larger trend towards decline.