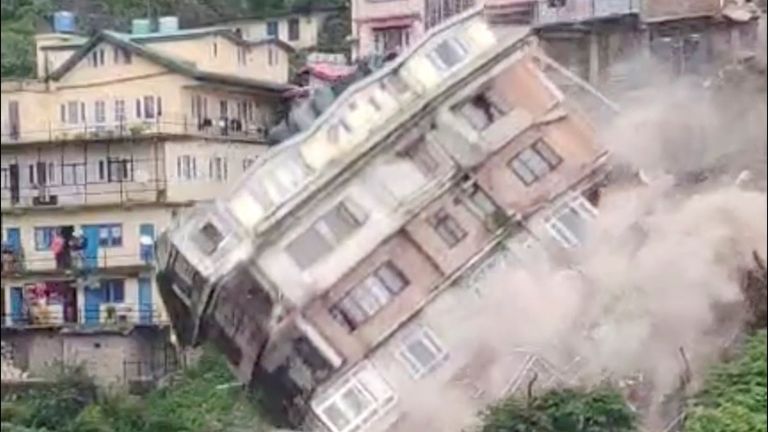 In northern India, floods and landslides caused by heavy monsoon rains have claimed the lives of at least 40 people over the past three days. Others are still missing.

Many villages were affected by heavy rainfall. Mud houses were washed away, roads were submerged in water, bridges were damaged, and rescuers raced for help.

At least 36 people were killed in Himalayan Himachal Pradesh and many others sought refuge in relief camps after being forced to flee.

In Uttarakhand, a series cloudbursts caused extreme rainfall in a very short time and led to the deaths of four people and the disappearance of 13 others.

Ranjit Kumar Sinha is an official from Uttarakhand’s Disaster Management Department. He said that “we have deployed choppers in rescue people who are trapped in remote areas because of rain-related incidents.” The rescue operation is currently in full swing.

According to the Indian meteorological office, more heavy rain is expected for the area in the coming days.

Floods in the eastern state Odisha have displaced thousands of people from their homes. The floods were caused by rains that hit electricity and water supplies and damaged roads.

Reuters reported that at least six people died in Odisha. 120,000 people were evacuated from affected areas so far.

Floods and landslides are a frequent cause of disasters in India’s Himalayan North during the June-September monsoon seasons. Scientists claim that they are increasing in frequency as global warming causes glaciers to melt.

Floods in neighboring Pakistan have already claimed the lives of at least 36 people. 11 were killed in areas bordering Afghanistan.

A disaster response official from Afghanistan‘s Logar Province said that there were at most nine deaths, but it was not clear how many.

Floods destroyed agricultural land and killed livestock, as well as swept away homes.

The floods had severely damaged the homes of villagers in Logar province’s Khushi district. They were seen cleaning up their mess.

Del Agha, an elder villager, stated that the flooding was unprecedented in Khushi’s history.

He said, “It destroyed all of the people’s animals and houses, as well as agricultural lands.”

“People are homeless. They have fled to the mountains.”