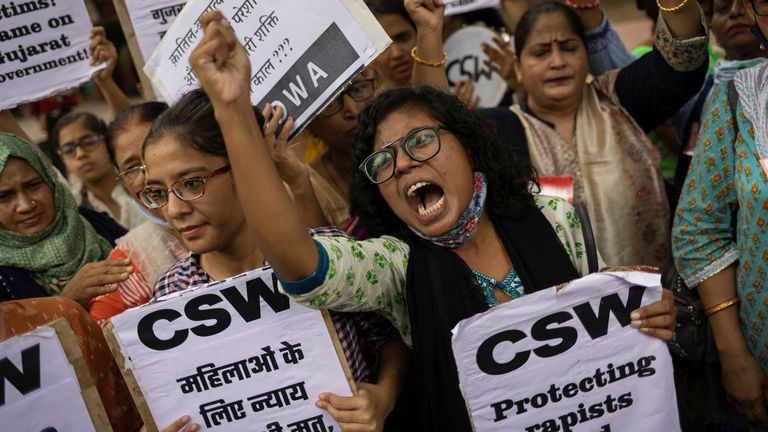 A Muslim woman who was gang-raped while pregnant by a Hindu mob, which also murdered her three-year-old daughter and 13 other members of her family, has appealed to officials to rescind their decision to free the 11 men jailed for the crimes.

Bilkis Bano was 19 years old and five months pregnant when she and her family were attacked during the 2002 Gujarat riots, which saw more than 1,000 people, mostly Muslims, killed in the violence.

The 11 men who were jailed for life in 2008 for rape, murder and unlawful assembly were released from prison in Panchmahals in the western Indian state on Monday.

Media footage showed the convicts being offered sweets outside the jail.

An official told Reuters news agency that the district jail advisory committee had recommended their release after considering the time they had spent in jail and their good behaviour.

“The fact is they had spent close to 15 years in jail and were eligible for remission,” Sujal Jayantibhai Mayatra said.

The decision to release the men was made by the Gujarat government, which Prime Minister Narendra Modi’s Hindu nationalist Bharatiya Janata Party (BJP) holds power.

Mr Modi was the state’s chief minister during the 2002 riots and was accused of condoning the violence at the time, as were police and government officials.

Ms Bano, now in her 40s, and her husband were not told the men were going to be released.

In a statement through a lawyer afterwards she said the news had left her “bereft of words” and “numb”, and “shaken” her faith in justice.

She said: “No one enquired about my safety and well-being, before taking such a big and unjust decision.

“The trauma of the past 20 years washed over me again.”

She has now appealed to the Gujarat government to “undo this harm”.

“Give me back my right to live without fear and in peace. Please ensure that my family and I are kept safe,” she said.

The decision has sparked outrage with protests held in the capital New Delhi on Thursday.

Opposition politicians and lawyers said the release contradicted the government’s stated policy of uplifting women in a country notorious for violence against them.

“The remission of the sentence of convicts of a gruesome crime like gang-rape and murder is morally and ethically improper,” said senior lawyer Anand Yagnik.

“What is the signal we are trying to send?”