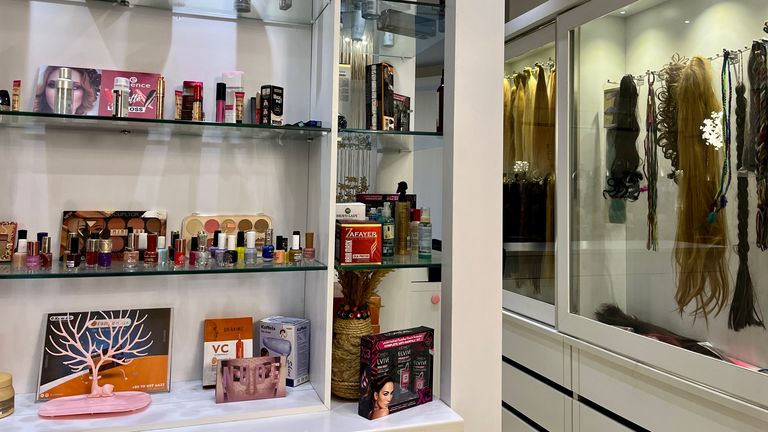 As the carcasses of goat and lamb hung on hooks in the wind, we drove down Butchers Street in Kabul. We saw a lot of men fighting over the prices. The butchers boys lifted the meat onto their backs, and then delivered it to the trucks.

An intersection at the street’s end marked the beginning of a series colorfully painted buildings.

The names of the beauty shops gave away the game.

We pulled over, and Dominique van Heerden (Sky producer) agreed to go over to take a look inside.

Sky News had already agreed to film and interview the salon owner, but it was too late.

Dominique was the only one who could enter.

The Taliban have declared that men under any circumstance cannot enter the parlours.

One might assume that they believe that the path to eternal damnation starts in a beauty salon.

Dominique is a top producer, but she was also to be a reporter and camera operator for this mission. She needed to experience it and return to Toby Nash to discuss what equipment she might require.

We watched her cross the road in a black abaya with shawl and then disappear behind a curtain.

She reappeared a few seconds later.

She said, “It’s full of women inside.” “And they’re in skinny jeans, Tshirts and high heels…I wasn’t expecting that!”

Armed with her phone, camera and microphones, she said goodbye to us and disappeared behind the curtains once more.


It was like another world. Dominique describes what she sees in

Before I even entered the salon, I could already hear the excitement of the women talking to each other as the music played in the background.

It was like another world, where women could be themselves for a while.

When they arrived, I noticed that they took off their black abayas & niqabs to hang them in a cabinet behind a counter with hair extensions and beauty products.

One group of young ladies were getting ready to get married.

Although they didn’t want me to see them, they were excited to tell me about their upcoming wedding celebrations. One of their brothers was getting married.

The salon owner was a strong, confident woman who walked around the room talking to customers and barking at staff. This woman is a hardworking entrepreneur who has no qualms.

I was not allowed to film the faces of customers or beauticians so I asked the owner for an anonymous interview.

After trying to convince her it wasn’t a good idea to cover up, I realized that it wasn’t a discussion. She wanted to speak on camera.

This salon is only open to her family as she is the primary breadwinner.

The beauty shops were filled with photos of famous models and products when the Taliban invaded Kabul around the same time last year.

The owners of the beauty shops were not sure what to do and temporarily closed their doors.

After a few days, she said that the Taliban had returned and asked her to reopen.

“They told us that we should wear the hijab with the black veil and long scarves. They also said that our faces should be covered.

Tense relationship between the salon and Taliban’s morality police is evident.

She is aware that they have all the power and could close her business down at any moment.

She is also concerned about the economy.

She says she doesn’t have the same number of customers she used to, mainly because so many women are no longer in work and cannot earn or spend as much money.

“No one has the money now, but women used to work and could meet their own needs.” She explained that they used to do their nails and color their hair, but now everyone is locked inside their homes.

“Their husbands pay only for their food, and don’t give any extra money to their wives for treatment.”


Fearful for their futures and angry

In Afghanistan a new generation has emerged over the last 20 years. They are more ambitious than the Taliban’s primitive sense of order.

They are angry and afraid for their futures but they are determined.

Although we won’t be able to identify her, we did meet a 22-year old woman who worked in her family shop and wanted to talk to us. She is finishing her Russian degree and doesn’t intend to stay there.

It struck me that my daughter was the same age as my daughter. I couldn’t help but think how lucky my daughter is to be able to choose her own path in life.

I was curious to see what the young Afghan woman would tell me if they ever met.

“My message to her is: Never surrender [your independence], be independent and live in freedom as many as you can, don’t be imprisoned and don’t accept extreme government policies.”

We met another student from university just a few blocks away. He was open to speaking to us.

They should allow us to have space, and give us the chance to work, get an education, and move on with our lives. It’s like being locked up in a prison cell for women who are unable to work or go to school.

Like many others, she feels their lives are being taken from them.

“I used to be happy and had goals for my life. But not now. I don’t have anything planned and don’t know what to do with my time and my nights. We have no education and no goals. She said that everyone is depressed.

The economic crisis has disproportionately affected women, who are among the most vulnerable in society.

It is a common sight to see children and women waiting in line at bakeries in Kabul in the early hours of the evening.

Wealthier customers can leave more money and receive bread at the end.

These scenes were captured outside a bakery in Kabul’s wealthier district.

Children and women waited patiently for the baker to bring them bread, before grabbing whatever they could.

It is demeaning. We are told that many people wear burqas to conceal their shame and identities. They don’t want their neighbours and friends to know that they are here.

While the Taliban’s old guard believes this is sustainable, the new generation knows that Afghanistan will continue to be cut off and sanctioned up until it changes.

Afghanistan’s economy is in freefall and it needs outside assistance. This may be the only hope for women.