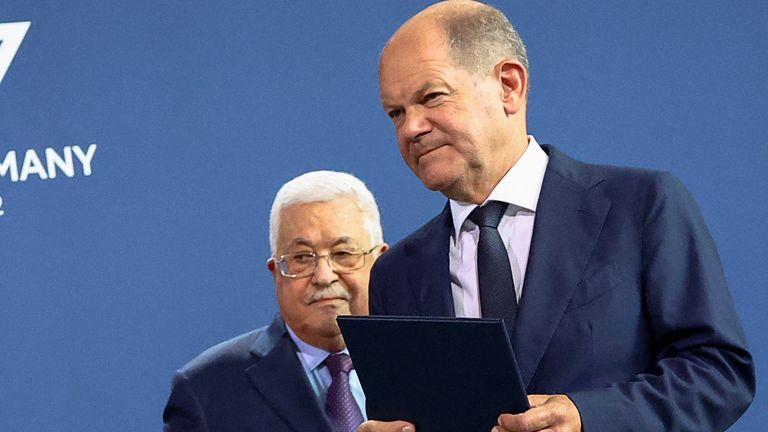 After accusing Israel of “50 Holocausts”, Mahmoud Abbas, the Palestinian president, has provoked anger. Germany’s leader said he was “disgusted” at the comment.

When asked by Berliners about Tuesday’s 50th anniversary of the attacks on the Israeli team at the 1972 Munich Olympics, Palestinian militants launched the attack.

He spoke alongside German Chancellor Olaf Scholz and said that Israel had committed 50 massacres in Palestinian cities and villages, in Deir Yassin Tantura, Kafr Qasim, and other places, as well as 50 murders and 50 Holocausts.

On Wednesday, Mr Scholz vented his anger via Twitter: “For us Germans, any relativization of the singularity of the Holocaust would be unacceptable and intolerable.

“I’m disgusted at the absurd remarks made by Mahmoud Abbas, Palestinian President.”

Six million Jews were killed by Nazis during the Holocaust. Israeli Prime Minister Yair Lepid stated that Mr Mahmoud’s comments were a “moral disgrace” as well as a “monstrous lying”.

He tweeted, “History will not forgive him.”

He said, “That a relativization, especially in Germany, of the Holocaust at a press conference within the Federal Chancellery goes unchallenged” in a statement.

His comment was a reference to incidents during which Palestinians were killed in 1948, the war that followed Israel’s foundation, as well as incidents over the years.

Responding to the outcry, the Holocaust survivor called it “the most horrible crime in modern human history” and stated that his comment was meant to draw attention to “the crimes and massacres against the Palestinian people”.

The comments were also supported by the Palestinian foreign ministry, which accused Israel of not tolerating any that reminded people of Israel’s “many crime”.

His comments come after a conflict flare-up this month, in which 49 people, including children and women, were killed in Israeli airstrikes in Gaza. Another 300 people were also injured.

Israel claimed that it launched the offensive to counter an imminent threat from Islamic Jihad, which fired more than 1,000 rockets and forced thousands of Israelis into shelters.

Rockets launched from Gaza to Israel

Three Palestinian militants were killed and dozens more were injured in an Israeli raid on Nablus, a West Bank city. This occurred just a day after the ceasefire was signed.

Eight people were injured by a gunman at a Jerusalem bus stop.