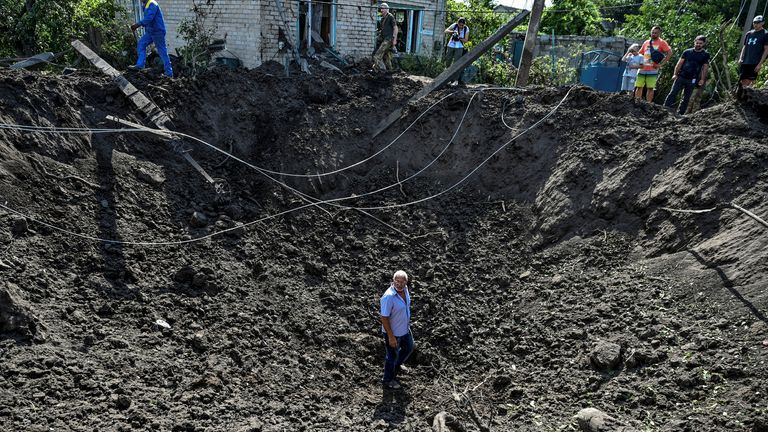 Moscow and Kyiv have accused each other of shelling the facility as UN Secretary-General Antonio Guterres proposed a demilitarised zone at the Zaporizhzhia plant in the city of Enerhodar, southeastern Ukraine.

Mr Guterres also appealed for both sides to stop military action around the facility to avoid “catastrophic consequences”.

The United States backed the UN’s call for a demilitarised zone and urged the International Atomic Energy Agency (IAEA) to visit the site.

Energoatom, Ukraine’s state nuclear power agency, said the Zaporizhzhia complex was struck five times on Thursday, including near where radioactive materials are stored.

Reports from either side about the circumstances at the plant have not been independently verified.

Vladimir Putin’s troops seized the city of Enerhodar in early March, and while the Zaporizhzhia plant is controlled by Russia, its Ukrainian staff continues to run the nuclear operations.

In his nightly address on Thursday, Mr Zelenksyy demanded Russia return the plant to Ukraine’s control and said the “world should react immediately to expel the occupiers” from the territory around the facility.

He said: “Russia once again broke the bottom in the world history of terrorism.

“No one else used the nuclear power plant, so obviously to threaten the whole world and to put forward some conditions and absolutely everyone in the world should react immediately to expel the occupiers from the territory of the Zaporizhzhia nuclear power plant.

“This is a global interest, not just a Ukrainian need.”

Read more: What are the risks of a nuclear accident in Ukraine?

Meanwhile, the UN’s nuclear chief Rafael Grossi warned “very alarming” military activity at the plant could lead to dangerous consequences for the region and called for an end to attacks.

Mr Grossi, who is the director of the IAEA, said experts from the agency have assessed there is no immediate threat to nuclear safety but the situation could change “at any moment”.

He also urged Russia and Ukraine to immediately allow nuclear experts to access the plant to assess damage and evaluate safety.

Mr Grossi made the remarks as the UN Security Council met on Thursday to discuss the situation.

Russian ambassador Vassily Nebenzia told the UN Security Council that accusations Moscow is shelling the plant are “cynical and absurd”.

He added that the world was being pushed “to the brink of nuclear catastrophe, comparable in scale with Chernobyl”.

However, Sergiy Kyslytsya, the Ukrainian ambassador to the UN, pleaded for the Russians to change course and leave the plant.

“None of us can stop the wind if it carries radiation. But together, we are capable of stopping a terrorist state,” he said.

The images suggest Ukraine may have new long-range strike capability with potential to change the course of the war, Western military experts said.

The base, on the southwest coast of Crimea, suffered extensive fire damage with at least eight destroyed warplanes clearly visible.

Russia has denied aircraft were damaged and said explosions at the base on Tuesday were accidental.

Ukraine has not publicly claimed responsibility for the attack.

It comes as Mr Zelenskyy has told Ukrainian officials to stop talking to reporters about Kyiv’s military tactics against Russia, saying such remarks were “frankly irresponsible”.