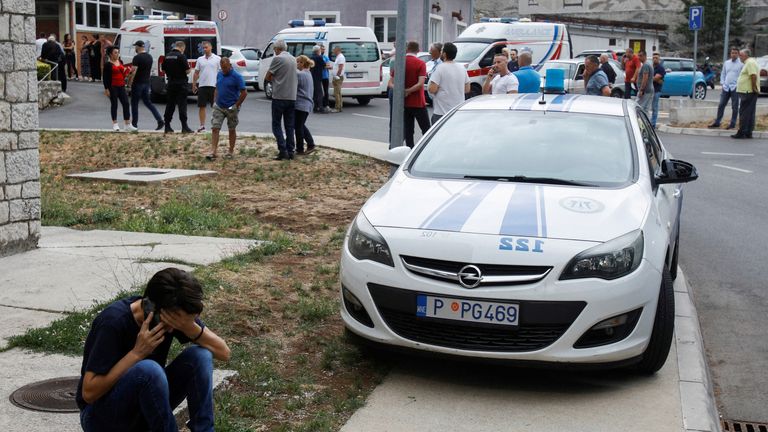 Ten people, including two children, were killed when a man went on a shooting rampage through the quiet streets of the western Montenegro city of Cetinje.

The gunman used a hunting rifle to first shoot the two children, aged eight and 11, and their mother, who lived as tenants in his house.

He then walked into the street and randomly shot 13 more people, seven of them fatally, before a passer-by shot and killed him.

Montenegrin police chief Zoran Brdjanin said the attacker was a 34-year-old man identified only by his initials, VB.

“At the moment, it is unclear what provoked VB to commit this atrocious act,” Mr Brdjanin said.

A police officer was among the wounded.

Cetinje, the seat of Montenegro’s former royal government, is 22 miles west of Podgorica, the current capital of the small Balkan nation.

Sky News presenter Ian King, who was in Cetinje the day before the shooting, described it as a “quiet, sleepy little place, full of striking architecture”.

“It is absolutely stunning that this has happened,” he added.

“There were very few people around when we were there – and most people appeared to be sitting around drinking in cafés and bars.”

Prime Minister Dritan Abazovic wrote on his Telegram channel the incident was “an unprecedented tragedy” and urged people “to be, in their thoughts, with the families of the innocent victims, their relatives, friends and all the people of Cetinje”.

President Milo Djukanovic said on Twitter he was “deeply moved by the news of the terrible tragedy”, calling for “solidarity” with the families who lost loved ones.