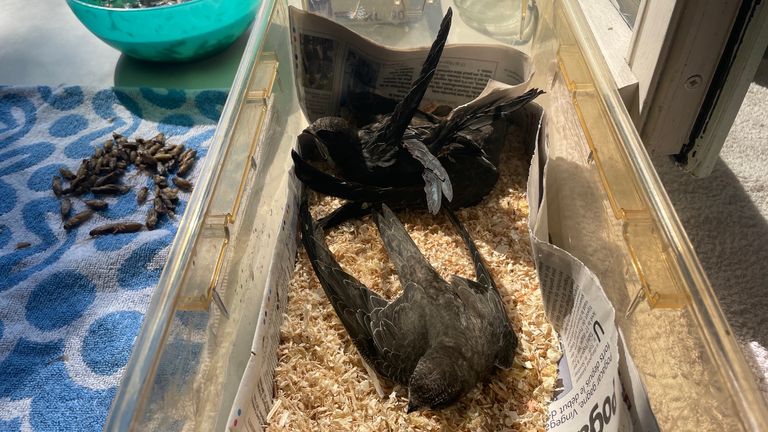 This week has brought a fresh wave of destruction for France.

Wildfires are burning out of control as a fourth heatwave bakes land already parched by the country’s worst-ever drought.

These extreme conditions are especially dangerous for the elderly and vulnerable, and on the French Riviera, care home manager Rafael Casimir is on a crisis footing.

The emergency supply room is stocked and ready.

Inside he shows us shelves packed with bottles of water, lines of fans and air conditioning units.

In 2003, a heatwave killed thousands of elderly people across the country.

The residents are already being given a different diet which includes more hydrating food, and their fluid intake has also been increased.

“It is a dangerous situation. As you know, many years ago in France, many people died and that is why we have an emergency plan in order to prevent the risk,” Rafael said.

Nearby, at an animal rescue centre in Saint Cezaire Sur Siagne, they’re also caring for the vulnerable.

Since April, the staff have been inundated with a rising number of climate change casualties.

In one room, they hand-feed more than 300 baby swifts, almost baked alive by the heat.

“When it’s 35C outside, under the roof it’s 45 or 50C in their nests, and they suffocate,” explained the centre director, Jennifer Jolicard.

In another cage, little sparrows huddle together, turning their heads to expose big bald patches where their feathers are missing.

The staff say they were found stuck to tarmac which had been melted by the blistering temperatures.

Downstairs are the mammals including two little hedgehogs orphaned by the drought.

We are told that the lack of insects means their mothers must go further to find them food which puts them at increased risk of dog attacks or being killed on the road.

For many local animals, climate change is a death sentence.

“We are seeing more animals but it’s the shape of the animals we are very concerned about because every year the animals are skinnier and skinnier, weaker and weaker,” said Jennifer.

Meanwhile, in the fields of Grasse, the flowers used for the country’s world-famous perfumes are also under stress.

High temperatures are stunting the growth of the brilliant white tuberoses, meaning the blooms being collected are smaller than usual.

Armelle Janody, the president of the Association of Grasse Flower Producers, explained they are facing two massive challenges.

On one hand: the heat which is affecting the health of some of this year’s harvest, on the other: the drought which is forcing producers to choose which plants to water, killing off some of next year’s crop.

Whether it’s the wildfires currently destroying homes and communities or the drought which will continue to affect businesses long into future, this extraordinary heat crisis has touched the lives of almost everybody in France.