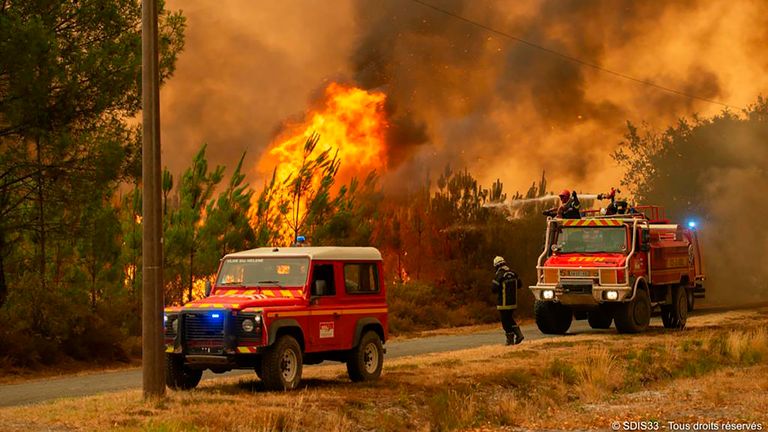 Over 1,000 firefighters are trying to control a massive wildfire that has decimated large areas of pine forest in southwest France.

The fire, which started on Tuesday, has destroyed 6,800 hectares (26 sq miles) of Gironde and Landes.

Minimum 16 homes have been damaged and around 10,000 people have been forced to flee the area by emergency services.

This comes just a month after the region was ravaged in flames and as France faces its fourth heatwave, following its worst ever drought .

Local officials stated in a statement that “the conditions are especially difficult: the vegetation is particularly dry after more then a month without rain.”

“The heat and dry conditions are expected to persist until Saturday, combining with extremely dry air to create severe fire danger conditions.”

On Thursday, temperatures in the region were expected to reach 40C (104F).

The European Commission sent four firefighting aircraft, two of which are based in Sweden, to help extinguish the flames.

Two helicopters and nine other aircraft were also mobilized.

Miriam Garcia Ferrer, spokesperson for the Commission, said that firefighting teams from Germany and Austria were also on their way to assist French crews.

She added that “The EU continues monitoring the situation across Europe” and is ready to assist the affected countries.

In the meantime, Gerald Darmanin, interior minister, and Elisabeth Borne, prime minister, are scheduled to visit Hostens, an evacuated small-town, to meet rescuers, crews, and volunteers.