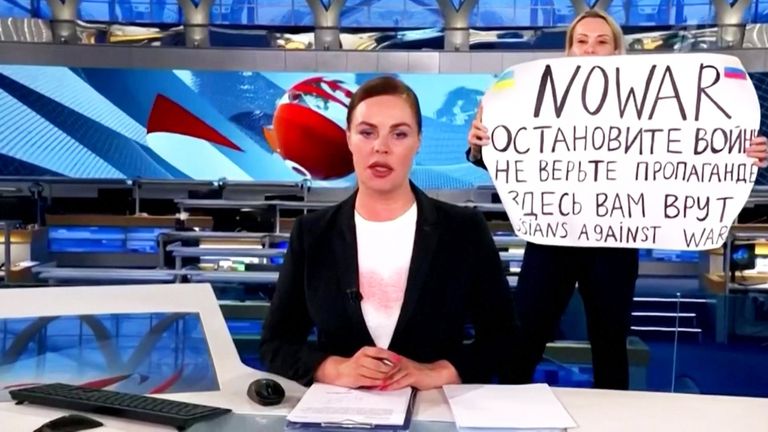 Russian authorities raided the residence of an ex-journalist for state TV who had quit the station after protesting against the war in Ukraine.

After she burst into a studio at Russian state TV to protest the war in Ukraine, Marina Ovsyannikova became international stardom.

She was holding a poster that said: “Stop war, don’t believe the propaganda. They are lying to us here.”

She was at the time the editor of Vremya’s nightly news program. However, after quitting her job, Ms Ovsyannikova became an activist and started to organize anti-war pickets.

She was punished for violating protest laws, and she later used social media to condemn the war on terror. She was fined 30,000 rubles (around PS223.40 at that time).

Later, she told Sky’s Moscow correspondent Diana Magnay that she doesn’t regret her actions, despite being subject to hostility from all sides , including her family.

Moscow launched a criminal case against her on the accusation of spreading false information regarding the Russian Armed Forces, her lawyer stated on social media.

She could spend up to 15 years prison if she is convicted.

Dmitry Zakhvatov, her lawyer, told Meduza that the case was likely related to a protest Ms Ovsyannikova held last month. The banner said, “(Russian President Vladimir Putin) Putin is a murderer, his soldiers are fascists.”


According to Telegram, Ms Ovsyannikova will be taken into the Investigative Commission for questioning following the raid.

In recent weeks, she was fined twice more for disparaging the military through a critical Facebook posting and comments she made at a court in which opposition figure Ilya Yanshin was taken into custody in anticipation of her trial on charges of spreading false information regarding the military.