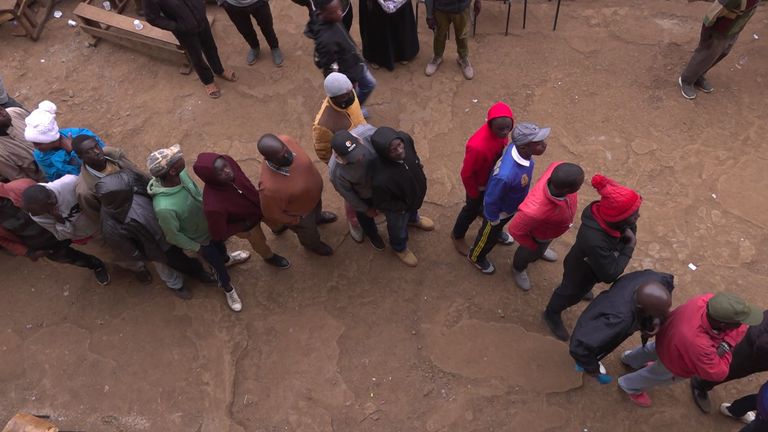 Millions of Kenyans have cast their votes to decide the country’s next president.

An hour before voting ended, the electoral commission announced that just over 12 million people had cast their vote.

From daybreak, long lines snaked through the streets of Kibera – one of the poorest areas of the country – with thousands waiting to choose their next leader.

A quarter of a million people live here on the outskirts of the capital, Nairobi, and feel the strain of a crippling cost of living crisis, which has seen food and fuel costs soar in recent months.

The state of the economy has been the key election issue with both of the leading candidates promising solutions.

Mr Ruto has centred his campaign on building a “hustler nation” appealing to disenfranchised young voters. It is an enticing platform in a country where youth unemployment is high and nearly 40% of eligible voters are under 35.

But Kibera has long been a stronghold of Mr Odinga. He is running for the fifth time and his supporters are adamant he will win.

“We have been voting for a long time and we have not seen him to be president, but he will be our president now,” says Caroline, among a throng trying to catch a glimpse of their chosen leader.

Nearly 200 miles away in the constituency of Turbo, Mr Ruto cast his ballot, confident of success.

“It is upon all of us to respect the choices of the people of Kenya as we have begun today in every part of the Republic of Kenya, and I look forward to a victorious day,” he said.

As the largest economy in east Africa and a key security partner for western nations, these elections are seen as a critical test for African democracy.

Joining the thousands of international election monitors on the ground are former heads of state, emphasising just how important this moment is for the entire region.

Speaking to Sky News, former Tanzanian president Jakaya Kikwete said he was hopeful the day would pass peacefully: “You can see for yourself,” he said. “Things are calm. It’s orderly. That’s all the people of Kenya need.”

As the day progressed, the initial enthusiasm we witnessed in the morning seemed to dissolve as voters trickled into polling stations.

In the lead up, many Kenyans told us they were concerned that violence witnessed in previous campaigns could be repeated. Some even packed their bags and planned to leave town until the outcome was clearer.

In 2008, more than a thousand people were killed and half a million displaced after a contested election. Subsequent elections in 2013 and 2017 also witnessed violence, albeit on a smaller scale.

Outside a quiet polling station in central Nairobi I met Kenyan author and analyst Nanjala Nyabola, who had just cast her vote.

“The thing to understand about election violence in Kenya is that it’s not spontaneous,” she said.

“It’s systematic, coordinated, funded at the highest levels. So it’s not so much the people that people should be worried about, it’s the people that have power. It’s this elite compact that will make the difference. It’s how will whoever loses take that loss?”

As the lines weakened behind her, she went on to give her forecast.

“The candidate that is going to get the most votes in Kenya this time around is apathy,” she said.

At 4pm, as the polling deadline neared, her prophecy rang true. Only 56% of 22.1 million registered voters had cast their ballots.