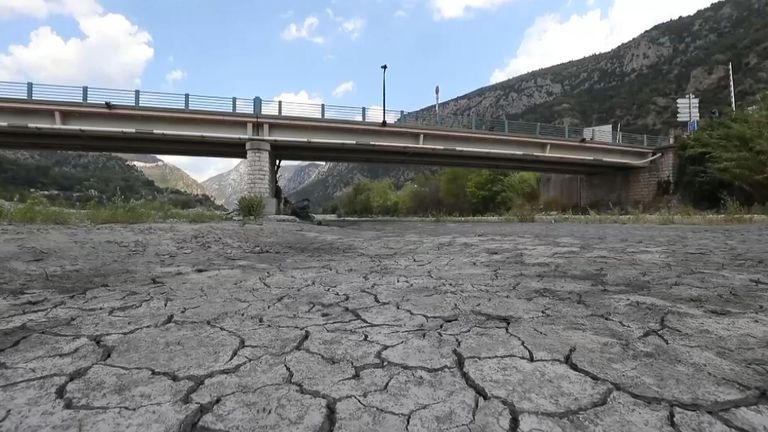 Seillans, in southeast France, has a dry stream, a fountain close to the town hall is no longer flowing, and the ground is dry.

Like much of France, the village is under the worst drought in its history.

Phillipe Greneche, chief of police, says, “I’ve been here 17 years and I’ve never witnessed this.” “Since April there has not been a drop of water… It’s sad.”

Phillipe will take us to Phillipe’s house to inspect the supplies that many residents rely on now that one of the village’s boreholes is almost dry up.

A white truck pulls up on the hillside and Daniel, the driver, starts to pump water into it.

He repeats the trip eight more times per day so that the taps don’t dry out.

People are restricted to 200 litres per day in order to make sure supplies last.

It is forbidden to water the garden or refill the swimming pool.

Phillipe now has to watch out for water thefts as part of his daily police patrol.

You could be fined up to EUR1,500 if you are caught violating the rules.

This is not the only area that is suffering from water shortages. In France, two-thirds are in crisis for drought.

Four heatwaves in recent weeks have caused wildfires for several weeks and made the Loire a little stream on some stretches.

The government declared that 100 areas were without safe drinking water last week.

Even Mireille Christine’s heat-loving Olives in Seillans are suffering.

They crunch on the ground.

“Look at this tree, there are no olives. She says that for the 2022 harvest, we will have virtually nothing.”

Restaurants in Seillans have not been restricted in their water use, but the mayor warned that if the drought worsens, everyone might need to reduce their water supply.

Patrick Girard, bistro owner, says that it would be a catastrophe. “People come here to eat and have a drink so I need to provide functioning toilets.” If there are any restrictions, we may as well close the restaurant.

He says, “It would have been better just to close.”

There is no relief, France will continue to bake despite another week of high temperatures.