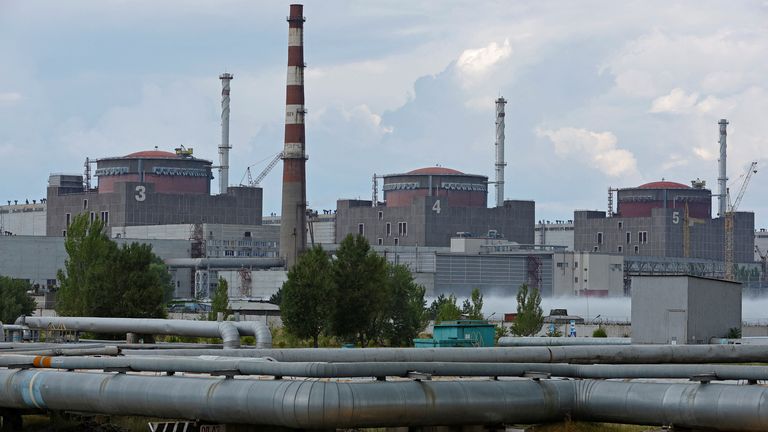 The defense intelligence agency of Ukraine has warned about new Russian “provocations” at Zaporizhzhia’s nuclear plant, which is under occupation in southern Ukraine. A mayor claimed that the city where the station is located had been shelled.

Rafael Grossi, Director-General of the International Atomic Energy Agency(IAEA), described recent Shelling at Europe’s largest nuclear plant to be “out of control” as well as “extremely serious”.

According to United Nations monitors, the violence in the conflict in Ukraine “underlines nuclear disaster’s very real risk.”

While Russia and Ukraine blamed each other, accusing each other of “nuclear terrorist acts”, Mr Grossi called for “utmost restraint around the site.”

Experts warn that the plant could become involved in the conflict and cause a nuclear accident, similar to the one that occurred in Fukushima (Japan) in 2011.


What was happening on Saturday?

Dmytro Orlov, exiled Enerhodar mayor, said that local residents had informed him about fresh Russian shelling directed at the city’s industrial area and Zaporizhzhia plants. It wasn’t clear whether any shells had reached the plant’s grounds.

Vladimir Rogov, a Russian-installed official, wrote on Telegram that Ukrainian forces were attacking the plant.

“According witnesses, explosions are heard again in town,” Mr Rogov stated. He added that shells had landed near the power station without specifying if they had struck the plant’s territory.

According to Ukraine’s defense intelligence agency, Russia is preparing “provocations” at this plant. Russian troops placed a Pion self propelled howitzer outside of the town and attached a Ukrainian flag to it.

Reuters reported that shelling was conducted near Enerhodar a week earlier and damaged a high-voltage powerline that feeds into the nearby nuclear plant.

Officials confirmed that there weren’t any radioactive leaks. However, operators had to shut down one of the reactors at the site as a precaution.

Energoatom, Ukraine’s nuclear operator, stated that Russian missiles had damaged three radiation monitors in the plant’s storage area for spent nuclear fuels. They added that one worker was also injured.

Interfax, Russia’s news agency, stated that Ukrainian forces fired the bombs and that only one of the administration buildings was hit.


What is the background?

Since the war, there have been numerous reports of missile fire at this plant.

A missile struck a training facility and set it ablaze in the early hours of March 4, just after the Russians invaded.

Soon after, the Ukraine State Emergency Service reported that one of the reactors had been shut down by operators as a precaution. However, radiation levels were normal and no critical infrastructure was damaged.

It is located near the Dnipro River, in southwest Ukraine, and has a capacity to hold six gigawatts. This would be enough energy for four million homes.

Experts believe that only three reactors were in operation since the Russian invasion. However, there are still personnel from Ukraine working there under duress.


Reactors could withstand a plane accident

Any nuclear power plant’s heart is its reactor. Controlled nuclear reactions can create enough heat to convert water into steam. This steam is then used for energy.

The latter are found in Zaporizhzhia, which is much safer than the ones used at Chernobyl, where there was a massive radiation leakage and many direct and indirect deaths.

Sky News spoke with Claire Corkhill (chair in nuclear material degradation, University of Sheffield) about the lessons to be learned after Chernobyl.

“One of the major points was that reactors should not be housed in extremely sturdy buildings. So, they are now built in enormous reinforced concrete containers.

“A plane could land in these buildings, and they wouldn’t be damaged.”

Reactors are also equipped with fire defenses. If the electricity supply fails, backup generators that run on diesel power can be used to generate enough power for three days.

However, there are other parts of this plant that could be damaged.

After the radioactive fuel in the reactor is used up to its maximum capacity, it is transferred to a large cooling pool for approximately two years.

Energoatom, the Ukrainian nuclear regulator, said that Saturday’s strike caused damage to three radiation monitors located at one of the storage areas for spent fuel.

Professor Corkhill states that a missile strike on the cooling pond building would be of concern because the water is radioactive and could cause radioactivity to spread around the area.

“A strike on the dry cask storage is not as concerning since the nuclear fuel is well protected with thick metal and concrete containers.”

However, Tony Roulstone, a lecturer in nuclear energy at Cambridge University warns that a strike on either of these could still lead to a leak.

He stated that reinforcements were not intended to combat military-grade weapons.

“This plant is in a war zone. Nuclear power and warfare don’t mix.”

The reactor was shut down in safety because of Friday’s shelling.

Roulstone warns, however, that if diesel supplies are exhausted on the ground, it could be difficult to get more.

He stated that there are “in-depth defenses at every nuclear power plant.”

“But when collateral damage occurs, you can remove any or all of these defenses and increase the risk.

Professor Corkhill concurs, adding that: “The higher the risk of a catastrophic nuclear accident, the more missiles you launch in the direction of a nuclear power station.”

“If there is an interruption in the electricity supply but diesel-powered generators remain operational, this gives enough time for the reactor to go into cold shutdown. This will turn off the reactor and prevent a meltdown from happening.

“But, if the electricity supply or the backup generators are damaged then the chance of an accident is very high.

It could lead to thousands of people being evacuated from homes due to radiation levels that are extremely dangerous, depending on how large the leak is.

Millions of people would be without power if all the reactors at the plant had to go down.